Villagers come together to help the environment 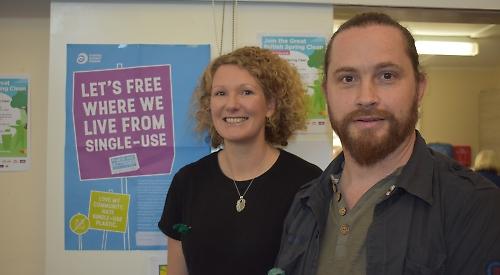 Lyndsay Henderson, who started Eco SoCo last year in response to the growing concern about climate change, hopes to make the village plastic-free by the end of the year.

In September, she registered with environmental campaign group Surfers Against Sewage, which gives communities plastic-free accreditation once it receives evidence that sufficient efforts have been made to reduce usage.

Accreditation does not mean there is no disposable plastic in the village but that it has to meet targets such as businesses agreeing not to hand out plastic bags.

Eco SoCo has to recruit “allies” and hold community events to prove it is encouraging residents to make lifestyle changes.

The event at the hall in Wood Lane was the first for the public and followed a similar one for businesses held in December. It coincided with Sonning Common Women’s Institute’s Green Heart campaign, which is part of a national initiative to get people talking about climate change.

Visitors could learn more about the harm plastic does to the environment and make their own pledges to help the planet.

Some of the ideas included using reusable coffee cups, buying loose instead of packaged fruit and vegetables and making your own yoghurt.

Mrs Henderson, 39, a chartered accountant, who lives in Wood Lane with her husband Karl and sons Jack, six, and Charlie, four, said she was confident of achieving plastic-free accreditation.

She said: “We need to show evidence of community events, so this was a brilliant example of that.

“I found it to be very positive and people really wanted to commit to their pledges. A lot of people said the targets were too easy and suggested harder challenges.

“My awareness has grown in the last couple of years but I have always had an appreciation of the need to do more.”

The WI members wore green hearts to encourage people to talk about the issue and children from different village groups, including the rainbows, brownies, cubs and Sonning Common youth club, were each given a cardboard heart to decorate on the theme of climate change.

“We feel sorry for the young people because it is their world that we are ruining and they are very aware of it as a problem.

“The green hearts are to show our love for what we would be missing if we lose people and places through climate change.”

Mrs Henderson said: “It was really nice to see how the WI have engaged with the community. They are encouraging people to talk and that makes such a difference.

“The green hearts are the sort of thing you wouldn’t have seen 10 years ago.”

Also at the event was Merlin Meyer, of Wood Lane, Sonning Common, who works for the World Wide Fund for Nature.

He said: “It is all about getting people talking about how they can make small changes to their lives to reduce the impact they have on the environment and can cut down on single-use plastic, which infects and destroys our world. Simple changes can make a huge difference.

“It is not about telling people they have to change — we are trying to educate them and facilitate change. If we can start a movement it will work so much better.

“I do think there has been a shift in attitudes towards climate change but I don’t think it has translated into action in enough areas.

“Some people don’t know how much of an impact they can have as individuals and it needs to be backed up by the Government.”