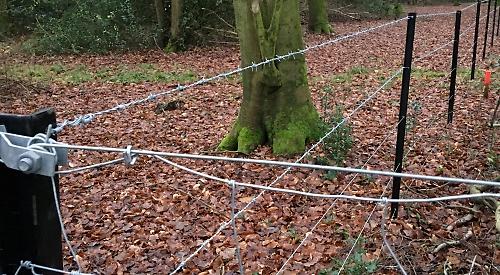 CAMPAIGNERS are fighting to stop landowners fencing off footpaths on private woodland near Woodcote.

They say the network of routes through Birchen Copse, which is to the east of Long Toll on the village’s southern outskirts, has been used by the public for generations and no one has tried to put a stop to it until now.

In 2017 the site was split into about 10 parcels and sold to new owners, several of whom have started to block off their boundaries.

They haven’t obstructed two public footpaths to the north and through the centre but have obstructed other routes running alongside or between them.

Some owners have used steel livestock fencing, including stretches topped with barbed wire, while others have placed heavy logs or planted lines of new saplings across the paths.

At least one has also filed a “landowner deposit” with the council. This is a formal declaration that no part of their land may serve as a right of way and will strengthen their case for ordering people off.

Now a group of residents hopes to fight back by having the routes designated as public footpaths.

They want to hear from anyone who can testify that they have used them for 20 years or more, which is the legal requirement for official designation. They also say the livestock fencing shouldn’t be allowed because it stops wildlife from wandering freely across the site. This goes against conservation guidance for green spaces to be kept open.

They will take this up with South Oxfordshire District Council, the planning authority, which gave consent in 2016 for an access road to be built across the woods in order to allow logging.

The campaigners are backed by the Woodcote Conservation Group and the Chiltern Society as well as Goring Heath Parish Council as the woods fall within its boundaries.

He said: “Clearly the landowners have the right to fence their property but in so doing they deny access to paths which people have used for generations and significantly alter the character of an area which has always been free to roam.

“Not everyone who buys these parcels of woodland fences them off — there are some who leave it as it has always been.

“Nobody has ever said ‘you can’t walk there’ but all of a sudden these barriers are appearing.

“People in Woodcte are quite irate. You come up against these fences almost as soon as you enter and have to turn around or find another route.

“It’s like a load of city dwellers have bought up land as they like the idea of being a ‘country’ person but they’ve gone about it in totally the wrong way.

“Unfortunately, the process for having rights of way recognised is lengthy so this won’t go away overnight.”

“It has been fenced off in an extremely aggressive manner and blocks off paths that people have used for years.

“If you want to be so unpleasant then fine, but this is the perfect way to annoy the living daylights out of everyone.

“At some point you risk some level of disturbance or even having the fences forcibly removed, which I’d be happy to lead because this behaviour just isn’t cricket.

“It would be fine if they put up fences with gates to stop motor vehicles accessing their land, but this isn’t acceptable and I want the county council to keep these long-standing routes open.”

Karen Woolley, of the Woodcote Conservation Group, said: “The piecemeal sell-off of woodland is a problem in this area generally and has a big impact on the environment.

“It means all sorts of animals can’t move around in the way they’re used to and I’ve suggested that the district council formally reviews how much land has been parcelled up in this way.

“We don’t want to pick on individual landowners but a national survey has indicated the need for bigger sections of joined-up green space and we should be encouraging that.”

Goring Heath parish councillor Liz Collas said she had identified some landowners but had been unable to contact them.

She said: “We’re concerned that plots are being fenced off for reasons that aren’t clear.

“It’s legal but it makes the woods very ‘bitty’ and less attractive as well as obstructing wildlife.

“There’s no evidence of any unauthorised activity but we’re monitoring it and would report anything of that nature to South Oxfordshire District Council’s planning officers.

“I’ve already heard from seven members of the public who are willing to state that they’ve walked through those woods for many years.

“Having a footpath recognised can be slow and difficult but we must put our marker down by starting the process.”

Anyone who wants to help the campaign should email info@woodcotecg.org.uk