HGV ban would save our homes 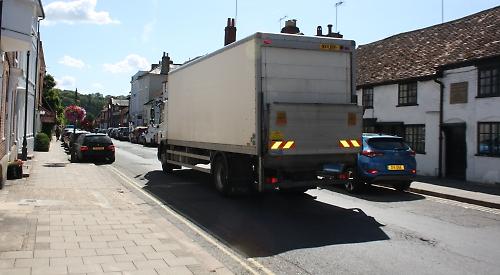 RESIDENTS say their homes are being damaged by heavy goods vehicles using Henley as a “rat run”.

They claim this has caused cracks in the walls of their historic properties, while others say they are often disturbed as their homes shake as the vehicles pass.

There are also concerns about the pollution emitted from the lorries, along with other traffic, and the damage they cause to Henley's roads.

They are backing a call to ban heavy goods vehicles with no business in Henley with the introduction of a 7.5 tonne weight limit.

Jennifer Seale, 78, has lived in her grade-II listed home in New Street for 12 years and thinks HGVs should use other routes to get to their destinations.

She is in favour of a weight limit and has just been told she will have to replace her window frames because they are damaged.

Mrs Seale thinks part of this was caused by vibrations from passing vehicles. She said: “They [HGVs] make the windows shudder and come down at about 6.30am. They’re quite scary and huge. They only use Henley as a lovely alternative to the motorways. It’s a horrible nuisance.

“This road is most unsuitable for them because it’s narrow, one-way and occasionally they get stuck at the corner. The size, the sound, it’s terrible. They’re an eyesore and I would like to see all of them banned. It’s always been bad but it has got worse.”

Journalist Michael Harvey, 56, has lived in his grade II-listed property, also in New Street, on and off for 10 years.  He is in favour of the weight limit and believes the problem is getting worse and worries HGVs could damage his home.

Mr Harvey said: “I’ve been at home most of the last four months and my study is on the first floor and there’s a constant stream of these large vehicles coming round at eye level.

“I can take a Zoom or even a telephone call and the people on the other end will hear the trucks go by.

“The trucks have to stop to manoeuvre at the corner by Savills and my whole place shakes when they come past. It can shake enough to dislodge stuff.

“The road is absolutely smashed and we see absolutely nothing happening in terms of protecting the street itself.”

He added: “The trucks don’t need to be here and are completely out of place. They’re just saving time. I would like to make it more of a whole town issue because it’s a town-wide problem.

“The trucks are entirely inappropriate and I believe New Street is particularly blighted. There were times during lockdown when we were able to chat with neighbours and realise what a beautiful street it is with the vista down to the river.

He added: “It’s awful to see so many HGVs return and it’s not just a New Street problem.”

In a letter to the Henley Standard this week, fellow New Street resident Justine Harris said her grade II -listed home was “suffering” due to increased HGVs.

She said: “I now have significant cracks showing in a number of my walls, which weren’t there four years ago when I purchased my home.

“The HGVs start using the rat run through Henley and down New Street every weekday before 6am, as I am woken up due to my building shaking and the noise they make bouncing down the street and air braking into the corner.” Bell Street resident Joanne Burgess has also supported the call for a weight limit. “The foundations of the listed buildings are all very small which is how our heritage buildings were built,” she said. “I wonder how long they will last with the strain of this traffic.”

Irene Fox, 70, who has lived in Bell Street with her husband Tony, 69, for 15 years told the Henley Standard that the noise from HGVs had a negative impact on her life.

She said: “The noise is impossible. It’s just relentless really. Sometimes it’s very difficult to concentrate. I keep my windows shut and they’re double-glazed units with another layer behind them and it still doesn’t protect us from the noise.

“We’re very fortunate that we have a courtyard at the back, which allows a certain amount of relief, but even there it’s becoming quite crazy.”

On top of this, the pollution turns her white window frames black and she has to clean them every week.

“I have to clean them all the time and can’t open the front windows,” she said. There’s just too much pollution and noise.”

Pat Mackenzie, 82, who has lived in a grade II-listed house in Northfield End for 20 years, said: “I can’t even keep my pictures on the wall straight. The whole house shakes — it’s very annoying. They should not come through the town and the other route is from Hungerford to the M4.”

She added: “The first month of lockdown was brilliant because there was no traffic at all. It was bliss and people came out of their houses and could talk to each other.”

Richard Guy, 72, lives in New Street with his partner Judi-Ann Roscoe and has been in Henley for about 20 years. He agrees that the noise from HGVs had got out of hand.

He is particularly concerned by HGVs which struggle to negotiate the sharp left turn from Bell Street into New Street so their wheels mount the pavement near the office of estate agent Savills.

Mr Guy said: “The major impact it has on us is the noise and the rattle to the point where I would be quite happy to have a night time ban from 11pm to 6am or something like that.

“I live with it and have got used to it but I can’t have a phone conversation in the street and I don’t open my windows, even at night. In practical terms, I suppose local deliveries need to be made and also how can you have someone pulling up each lorry passing through the town and asking if they are using it as a cut-through? It leads me to conclude that maybe an overall ban would be easier to enforce.”

As previously reported in the Henley Standard, Amanda Chumas, of Bell Street, Henley, is campaigning to introduce a weight limit, which could cost about £100,000 to do.

Oxfordshire County Council has told her that the town council would have to pay to introduce any restrictions.

Lorries that have a legitimate reason to come to Henley, either to deliver or collect in town, would be exempted by a permit scheme.

Councillor Stefan Gawrysiak, Henley’s representative on the county council, backs the move and will put a resolution to the next full meeting in September 8 calling for the limit.

He said money could be sourced not just from the town council but also the county and district councils and grants.

Cllr Gawrysiak said: “There’s a strategic road network, which is the Maidenhead to High Wycombe bypass, which all lorries should go through. We’ve seen many lorries coming through town which have no place in Henley at all. Using it is just sheer laziness.

“I have actually been into people’s properties in Bell Street and New Street. When an HGV goes past, it rattles the buildings and their foundations.”

He added: “The other aspect is air quality in Henley. Lorries are three per cent of the traffic through town and contribute 30 per cent of the pollution. We’re subjecting people in their homes and on the streets of Henley to levels of pollution that we should not have to suffer.”

Meanwhile, David Bartholomew, who represents Sonning Common at the county council, fears banning certain HGVs in Henley will have a negative effect on surrounding villages.

Speaking at a meeting of Sonning Common Parish Council on Monday, he said: “My concern is that if the ban happened, HGVs would simply be deflected along the B481.

“My recommendation is the parish council writes to the cabinet member for transport expressing concern about the unintended consequences of Cllr Gawrysiak’s proposal.”

He added: “It’s no good solving a problem for Henley if it just shunts it through Highmoor, Peppard and Sonning Common.