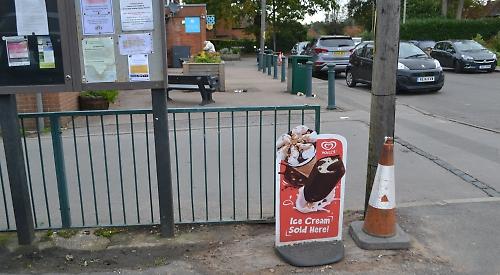 THE mystery of Sonning Common’s missing post box has been solved.

The red metal box, which was embedded in a brick pillar near the One Stop shop in Wood Lane, vanished on Monday last week.

But no notice had been left by Royal Mail to explain where it had gone or why.

Parish clerk Philip Collings said it had been taken away without an alternative being provided.

He said: “The contractors came along to remove it and we tried to tell them they couldn’t do that but they’d knocked down the bricks.” He said the nearest post box was a mile away in Peppard Road.

The alternative was to use the Post Office counter in the shop but sometimes this meant a 15-minute wait to be served.

Mr Collins said: “Vulnerable people are concerned about waiting in a queue inside. They’ll also have to travel and wear masks to use this service.

He added: “We’ve had the post box for donkeys’ years. Around Christmas it always overflows because of how widely used it is. A lot of residents are worried as it’s getting closer to that season again.” Royal Mail apologised, saying that the bricks were in an unsafe condition. A spokeswoman said: “We have had to temporarily remove the post box from service because the wall by the box was in an unsafe condition.

“We are looking to repair it as soon as we are able to while following the necessary social distancing requirements. We would like to apologise for the inconvenience this causes our customers. In the meantime, customers can use other boxes in the area or drop off mail at any Post Office branch.”

She didn’t give a date for the
re-instatement of the post box.