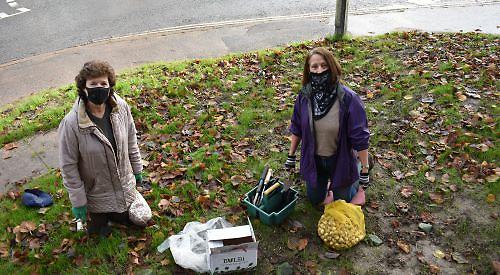 BULBS have been planted on a green triangle in Henley after it was left in a poor state by workmen.

Contractors for internet service provider Zzzoomm parked their vehicles on the small patch of land in Reading Road, opposite the Three Horseshoes pub, while they were laying cables.

Residents complained that the ground had been churned up and the existing bulbs damaged.

Members of the Henley Society approached Zzoomm, which agreed to donate 300 crocus and 250 daffodil bulbs.

The first set of bulbs were planted by Catherine Notaras and Valerie Alasia, who are both executive members of the society, on Monday.

The rest will be planted in the coming weeks.

Ms Notaras said: “The society was anticipating that it would be a problem when we saw all the equipment parked up.

“Zzoomm were very kind to order some bulbs for us and hopefully we will be able to restore the area to its former glory. They spread some grass seed off their own back.

“It is about community spirit and having a good relationship with the company. Every single little triangle like this makes up the character of Henley. All of the green spaces contribute in some way and people appreciate them.”

Mrs Alasia, who lives in Makins Road, said the area was a community asset and she had planted bulbs there nearly 10 years ago. Kellie Hinton, who chairs Henley Town Council’s recreation and amenities committee, said: “This was a nice area with a bench when Zzoomm came in to do their essential work.

“Unfortunately, it was not put back to how it was before and some residents complained. It was obvious that there are people who do care about it and they were upset that it had been destroyed.

“It was nice of Zzoomm to rectify their mistake.”