Children dress up as trees to spread their message 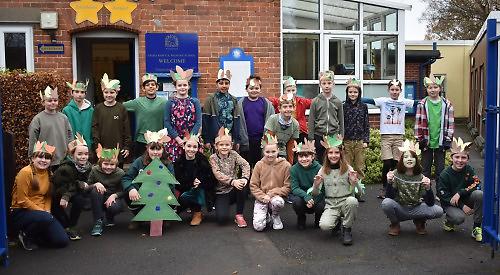 CHILDREN at Stoke Row Primary School dressed up as trees to raise awareness for their environmental project.

They are promoting tree planting in support of the Woodland Trust, a conservation charity which wants to plant 50 million trees by the year 2025 to help fight climate change.

The children have also been in contact with schools in other countries, including India, Australia and Zimbabwe, to help spread the message.

Teacher Annie Gilson said: “Our mission at school is for the children to shine like stars and shine a light on issues affecting us all. During such difficult times as these, it’s so important for the children to focus their efforts on something with which they can actively make a difference in the world.

“The children have learnt an incredible amount of facts. The one they remember the most is, ‘If we don’t make a change in the next 11 years all the damage is irreversible’. They’ve really taken it on board.”

The school will be planting 15 of its own trees in March, some of them in the Well Orchard in Stoke Row. The saplings were donated by the trust and Henley MP John Howell has agreed to come and witness the planting.

Last month, the school won an impact award from Picture News, a teaching resource website, for the project.