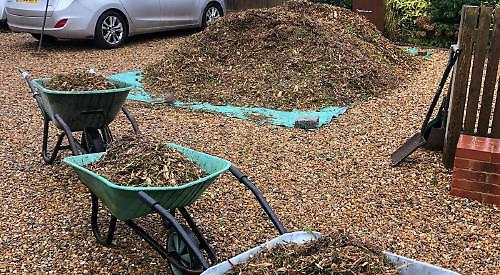 A WOMAN from Kidmore End has covered muddy footpaths in the village with wood chippings to help prevent dogs catching Alabama rot.

Gemma Malaperiman, of Chalkhouse Green Road, came up with the idea as she was having to wash her golden retriever, Carla, after every walk.

She was worried that other dogs in the village might catch the disease from the mud.

Alabama rot is distinguished by sores which appear on a dog’s lower legs or face and can quickly cause death from kidney failure. Cases typically occur over the winter after walking in boggy areas.

Mrs Malaperiman and 12 other residents spent three days laying woodchippings across the three main footpaths in the village to protect their dogs from the mud.  The routes run from Chalkhouse Green Road towards Sonning Common, Coopers Pightle towards the play area near Butlers Orchard and from Wood Lane towards The Copse Country House in Mill Lane.

Mrs Malaperiman, who lives with her husband Patrick and their other dog Monty, said she had found the work “satisfying”.

“It didn’t take very long as a lot of people came out to help,” she said. “It was a simple solution that needed manpower.

“It was lovely to see that community spirit and hopefully we can take it on board for other tasks we may need to do in the future.”

Mrs Malaperiman, who has lived in the village for 15 years, said the idea was a “random brainwave”.

After checking with the parish council whether she was allowed to put down the wood chippings, she used the village WhatsApp group to see if any other residents would like to get involved.

Fellow residents Calum and Jane MacLean offered to help and contacted Freddie Williams, of Hansen Tree and Garden Maintenance, who delivered four loads of wood chippings for nothing.

Mrs MacLean said: “We enjoyed the work but the effort was tiring, especially on the first day as there was only about five of us loading and pushing wheelbarrows of chippings. But all in all it was a nice experience.”

She and her husband don’t have a dog but sometimes look after neighbours’ pets and use the village paths frequently.

Residents used their own wheelbarrows to transport the chippings to the footpaths from the MacLeans’ home and used spades to lay them down. The work took three days.

“We probably covered 100m of footpaths,” said Mrs Malaperiman. “Different groups of people of all ages came out to help —  even the children were enjoying it.

“We don’t know how long the chippings will last but they should be okay for the rest of the winter. I wouldn’t mind doing it again if we have to.”

Dogs have reportedly caught Alabama rot from woodlands in Gallowstree Common. No cases have been confirmed for certain as the disease can only be diagnosed by a post mortem. Only a few hundred cases have been formally identified in Britain since the first known instance in 2012.