Small things we can all do to help nature 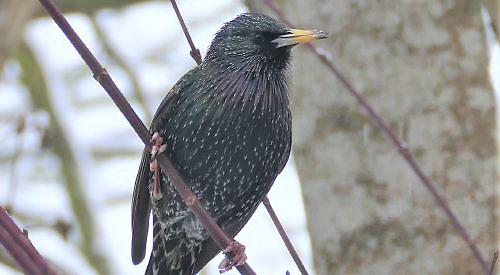 I BET some of you remember the classroom nature table from your schooldays. It would probably have had an old nest that someone found on their walk home, a discarded eggshell, some cobnuts and sticks in a jar of water.

We used to call the sticks sticky buds but learnt they were horse chestnut twigs identifiable by the little horseshoe shapes with nail-like dots on the twig where the previous year’s flower had been. Over a few weeks we would watch as the tightly closed, very sticky buds began to open and big shoots appeared, eventually turning into the huge flower. That was probably my first lesson about nature, but I wish I had been taught a lot more.

Many people think that the climate and ecological emergency is too big a problem and there is nothing they can do about it whereas I believe it is too big a problem not to do something about. I hope that I can demonstrate some smaller things we can all do to improve our environment.

Endangered species to many people, especially children, are big fluffy animals in far-off lands. However, we have our own not so big and maybe not so cute endangered species right here on our doorstep. I was shocked to learn that birds such as house sparrows, starlings and song thrushes are on the RSPB’s red list.

Why is this? Well, it’s partly to do with loss of habitat but probably more to do with the disappearance of their natural food source, insects. Why should the insect population have decreased so much? The answer is us, humans. A major change in human habits in both agriculture and horticulture and overuse of pesticides and insecticides has led to their demise.

Here are a few positive things that anyone with a garden can do:

• Grow simple primroses, a lovely early flower and a great source of food for the solitary bee, one of the earlier bees in our gardens.

• Try not to grow too many double flowers as they may look lovely but are of no use to pollinators such as bees and butterflies.

• If you buy your flowers in a garden centre don’t be misled by the “bee-friendly” labels as often these plants have been doused in insecticide at the nursery where they began life so their flowers look perfect for display. Instead, the blooms that have the most insects buzzing around them will be better for the wildlife in your garden.

• Look at what grows naturally in the area, for instance, wild marjoram and valerian will grow anywhere and always have lots of insect visitors.

Last spring my neighbourhood was operating a very good plant swap which not only helped gardeners unable to visit nurseries due to the lockdown but we also got to know who lives behind the hedge at number 37.

The new Facebook group Green Gardens Henley-on-Thames has some very generous contributors willing to share advice, seeds and plants. Sometimes Henley Recycle, another Facebook group, has plants and gardening equipment free to swap and this means you are saving things from landfill. If you don’t have access to a computer, I am sure a friend or kind neighbour would be happy to help.

Recently Greener Henley has contacted every primary school in the area inviting them to take part in some simple environmental activities. These require children to go outdoors and engage with wildlife, thinking about the importance of this habitat to the wellbeing of all species. We are hoping the resulting artwork will appear at an exhibition later this year. If you have children or grandchildren you could encourage them to do the same and maybe learn from each other. It is as simple as lifting up a stone or a pot and wondering about the little creature you might find underneath.

You may be interested in one of the many Citizen Science projects that are very popular these days. We are all used to the Big Garden Birdwatch when we count and identify the birds in our gardens, while the Butterfly Conservation Society wants the public to help collect butterfly data. But what about the Earthworm Society of Great Britain, which is keen to recruit more recorders?

Greener Henley is hoping to run some of our own Citizen Science projects later this year. We have many special interest groups and are buzzing with ideas. If you are interested in finding out more, please email greenerhenley@gmail.com

Finally, our newly formed swift support group is looking for keen woodworkers with some spare time to help build nest boxes. Any offers?