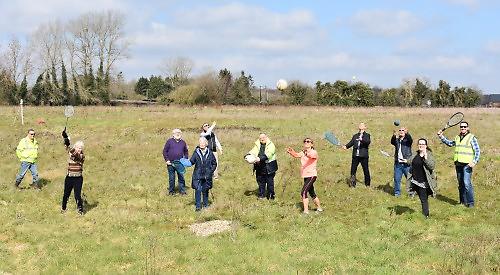 WORK on a new recreation ground in Sonning Common started on Monday.

Blakedown Sport & Play, of Banbury, has been awarded a contract by the parish council to create the £519,000 amenity off Reades Lane, opposite Maiden Erlegh Chiltern Edge School.

It marks years of planning by a council working group after the land was sold by the Pelly family, which owned it, and developer Linden Homes for a nominal fee of £1 in return for supporting an application for 50 new homes which have since been built on the adjacent field known as Sonning Grove.

The developer also contributed £250,000 to help pay for levelling, drainage and seeding the recreation ground as well as £16,000 towards fencing it.

The facility will include a main pitch for a variety of sports as well as a multi-use games area and a path around the edge of the field, which measures 4.1 hectares.

Barry Jacobs, contract manager for the company, said: “Everyone on the working group and the council is keen to get it done.

“Some of the group’s ideas were good and some we helped push to make a better decision.

“We said, ‘Let’s get started on the site and then it’ll be easier to see and make decisions from there. The whole area is being used.”

He said the earthworks would take up to 14 weeks with a maximum of 10 workmen on site at once. “Levelling will be the first thing to do,” said Mr Jacobs. “We are going to set up the site, put up fencing and then the machinery will arrive and we’ll put the soil in and get everything moving.

“We do a cut and fill method so where the land is high we will dig into it and where there are dips we will fill it in. The hard thing will be if it rains. Then it will be a nightmare.”

Carole Lewis, chairman of the council, said she was delighted that work was starting.

“It recognises the hard work of the working party and we thank them for all their efforts,” she said. “This will be a unique recreational and sporting space for the benefit of the residents of Sonning Common and surrounding area.”

Aurora Construction Consultancy, of London, has a contract with the council to manage the project.

Mika Rinta-Suksi, who used to be a parish councillor, is a senior project manager for Aurora.

He said: “I have two teenage boys and we are very active as a family so it has always been of interest to see what facilities would be coming to the area. To be able to help with the project going forward is a joy.”

David Bartholomew, who represents the area on Oxfordshire County Council, and Leigh Rawlins, who does the same on South Oxfordshire District Council, each contributed £2,750 from their councillor allowances.

Planning permission for the development of the field was submitted to the district council, the planning authority, in August 2019 but was then withdrawn before a decision was reached.

A second application was submitted in July last year and planning permission was granted.

A separate application was submitted in December for lighting the multi-use games area and around the site.

The idea for the recreation ground came from the Sonning Common neighbourhood plan, which passed a referendum in September 2016.

A public consultation meeting was held in 2018 which more than 200 people attended and indicated the type of sport and recreational facilities they would use.

The public are encouraged not to visit the site while the work is taking place and it has been fenced off.