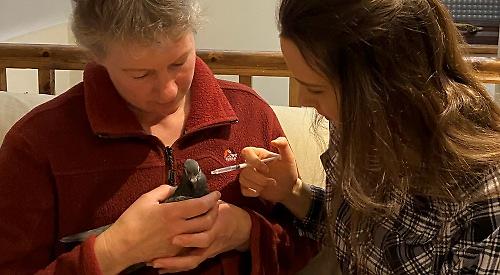 A FAMILY from Wargrave have cared for around 200 birds over the past year.

Wargrave Wild Bird Rescue is run by Sarah Ball and her daughter Elena, who live in Victoria Road.

They have been rescuing and rehabilitating young wild birds for the last four years. They aim to release the birds back into the wild when they are fit again.

The family use four aviaries to look after the birds and their work has continued despite the limitations of the coronavirus lockdowns. Mrs Ball said they had been busy as more people were going walking and finding injured or abandoned baby birds.

She said: “During the craziest months, we had birds in every room of the house. This was complicated by the need to quarantine new arrivals.

“At one point, Elena had nine babies in her bedroom, some so tiny and bald that they were under incubator heaters for several weeks.

“Some of the birds we treated included blackbirds, goldfinches, robins, crows and magpies but the most common were pigeons and doves.  We release as many birds as possible, though we currently have five wood pigeons that are, sadly, unsuitable for release.”

Mrs Ball appealed to villagers to help by leaving fresh water, a mixture of seed, dried mealworms and chopped-up raisins on bird tables.

The family normally ask people to bring birds to their house but they can collect if transport is a problem.