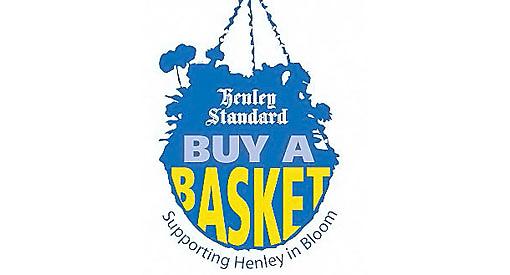 HENLEY in Bloom sold 129 hanging baskets in the first week they were available, which is already 54 more than at the same stage last year.

Residents and businesses are now able to order the baskets as part of the annual campaign supported by the Henley Standard.

Windowflowers, which is based in Burnham, will supply and install the baskets at the end of May and beginning of June and maintain them all summer.

The contents of this year’s baskets have not yet been decided but the flowers will be bright to help celebrate conquering the coronavirus crisis and will have pollinators for insects.

One of the first orders was placed by Claudine Russell, a funeral administrator at AB Walker & Sons in Reading Road, Henley, who has been ordering them for seven years. She said: “We always order two baskets because it gives back to the community and they always look so beautiful.

“It’s always something we can tell clients if they don’t know where we are located as we can say, ‘opposite the garage with the hanging baskets’.

“We’re always eager to be one of the first to order because of the nature of the business, I don’t want to go and forget it so I order them as soon as possible.”

She said: “We’ve ordered the baskets for the last two to three years and they transform the outside of the building. They always get a lot of sunlight out there and look lovely.”

Sheila Sugg, accounts manager for the Villa Marina in Thame Side, said she has been ordering baskets for the restaurant for years.

She said: “We tried to do our own thing for a while but the watering process was too hard so we went with Windowflowers for at least the last five years.

“We order three summer baskets and I’ve always been very impressed by them — we’re very eager to participate.”

Stephen Christie-Miller, head of office, said the company have been ordering them for as long as he could remember.

He said: “We love them. I think they’re a very important part of Henley, especially after the dreadful winter we’ve had and we look forward to seeing them put up.”

Ann Manning, who runs the insurance brokers of the same name in Reading Road, said she has also been ordering baskets for a long time. She said: “We always order two summer baskets and we are always absolutely pleased.”

Leo Hallam, who is communications manager of Courtiers Investment Services in Hart Street, said the company may install an additional bracket to the building this year in order to display more baskets.

He said: “Courtiers has been ordering the hanging baskets from Henley in Bloom for more than 10 years.

“I couldn’t imagine the office frontage without them. They help bring beauty to the town and nature to the streets.

“Historically we’ve ordered three at a time but looking closely at our office frontage, we’re going to see if we can get an extra bracket installed and order four.

“This would add some symmetry and extra summer sparkle and as well as being bright and fresh, we appreciate that they’re being well looked after.”

Alexa McQueen-Turner, who owns McQueen Turner Solicitors in Station Road, thinks the baskets are important as it reminds her she is part of a community.

She said: “We’ve ordered one summer basket and we’ve done it for the last few years. It’s nice to have something pretty outside the office especially when it comes to Henley Royal Regatta.

“We even ordered winter baskets last year, which we don’t normally do, because of the pandemic.

“The baskets are a nice way of brightening up the town while we all come out of lockdown.”

Deputy mayor, David Eggleton, who chairs the town council’s Henley in Bloom committee, said he’s confident the record number of baskets sold in a year will be beaten.

“I think it’s fantastic in such a short amount of time that we have sold that amount already.”

Councillor Donna Crook, who is the vice-chairman of the Henley in Bloom committee, said it’s “really great” to see that a large amount of baskets have been sold already.

She said: “It’s fantastic that people are being so supportive and the town is going to look so lovely.

“It’s nice to see people banding together as a community to make the town look nice as restrictions are easing.”

The baskets cost £67.50, including maintenance and watering, and brackets to hang them cost £30 each.

To order a basket, complete and return the order form or email Trish Rae at t.rae@henleytown
council.gov.uk