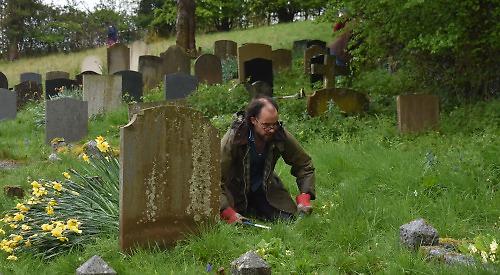 TWENTY volunteers took part in a socially distanced tidy-up of the upper churchyard in Remenham.

They met at St Nicholas’ Church on Saturday morning and spent three hours cutting back overgrown hedges and trees.

Among them was Rev Jeremy Tayler, the rector of St Nicholas and St Mary’s Church in Henley.

The turnout was appreciated by the churchwardens as many of the helpers were not regulars at the church and the forecast for the morning was heavy rain.

The volunteers were disappointed to discover a significant amount of rubble that had been fly-tipped.

Charlotte Every, a churchwarden who lives in Aston, said: “We were there for a while but it is quite a big area and it has been neglected. It is supposed to be an annual thing but we didn’t do it last year, so it was overdue. Despite an abysmal forecast and heavy rain first thing, 20 hardy souls turned out.

“There were quite a few people from the village who are not regular churchgoers but they still wanted to help out, so it was a nice community event.

“Luckily, the rain eased off during the morning and a great deal was achieved and the looks much tidier now. It was definitely worth the hard work. There are lots of beautiful primroses out. It’s certainly worth looking at if you’re walking through.”

Mrs Every said it was hoped to hold another clean-up in September. The next task would be to replace the concrete gate posts and fencing at the entrance as well as renovating the noticeboard.