Couple save fawn stuck in fence 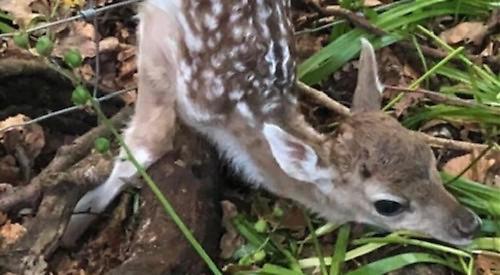 A COUPLE from Stoke Row helped rescue a fawn after finding it stuck in a wire fence.

Rebecca Roberts found the animal while walking her vizslador Amber in woodland near the Crooked Billet in Newlands Lane.

She noticed the fawn was still breathing but felt nervous about helping it in case she injured it or worsened an existing injury.

Mrs Roberts, who lives in Nottwood Lane with her husband Aled, said: “I walked past it and suddenly thought, ‘It’s trapped.’

“I could see it was breathing but I’m not very good in these sorts of situations and I had my dog and didn’t want her to get near it.

“I phoned Aled and he came out with an old towel and very gently got the legs through the fencing.

“While I was waiting I could see its head was tilting over and I was talking to it and when it could hear me its head came up.” The incident happened at 6.30am on Thursday last week.

Mrs Roberts, who works in IT sales, said: “We tried to ring the RSCPA but it was very early so Aled picked her up in the towel and rubbed her to warm her up as she was very weak.

The couple returned to the woodland later that morning and found no sign of the animals, which they took to be a good sign.