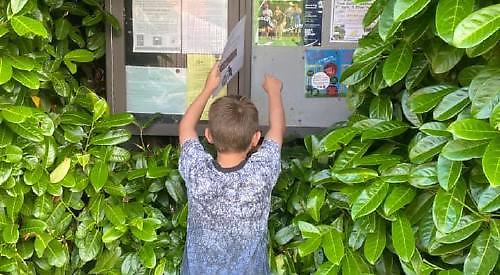 A BOY from Sonning Common has made posters to encourage residents to stop littering.

Jake Coyne decided to take action after his six-month-old maltipoo, Ziggy, kept picking up litter in his mouth.

The nine-year-old, who attends the village primary school in Grove Road, said he was worried that discarded rubbish was killing animals.

Jake said: “I decided to hang posters up because I kept finding rubbish outside my school when we went for walks. It kind of makes me annoyed because it’s killing animals because they can eat it.”

Jake, who lives with his mum Helen and older sister Ruby, 12, made about eight posters to hang up around the village.

He said: “My mum showed me how to lay them out but I put them together and chose the words and pictures. I used Google to help me with the spellings.”

The posters, which read “Don’t litter it’s bad for pollution and is killing innocent animals”, were attached to lamp posts, fences and the parish council’s noticeboard on the corner of Wood Lane and Peppard Road.

Mrs Coyne, who lives in Westleigh Drive, said she was pleased that Jake had the initiative to put the posters together.

She said: “He was sat there one evening and just said he wanted to do something about the litter and wanted to make posters and off he went.

“He came into the kitchen and asked for them to be laminated and then asked for cable ties and said: ‘let’s go around the village, we need to hang them around now.’

“It was about 7pm and I thought, ‘Can’t it wait?’ But he wanted them to go out straight away.

“It’s quite a good thing he wanted to do it. I thought: ‘well done,’ because it shows he knows where the litter should go.”

Mrs Coyne said she shares the same frustrations as Jake when she sees rubbish on their daily walks.

She said: “We see baby wipes and chocolate wrappers, which are poisonous for dogs. I have to pull them out of Ziggy’s mouth. We’ve always got to him straight away but it’s just frustrating.

“Jake will say, ‘he’s got something in his mouth again’ and we will have to stop.”

Jake, who says he always puts his own litter in the bin, said his next posters will be about getting rid of dog mess responsibly.

An annual litter pick in the village, called The SoCo Spring Clean, started in 2018 to tackle the issue.

This year’s event, in which volunteers are given litter-pickers, gloves and high-vis jackets to pick up rubbish, was due to take place in March but was cancelled due to the coronavirus pandemic.

Organisers continued to pick up rubbish along Peppard Road between Sonning Common and Emmer Green in the meantime.

Emma Lawrence, who organises the litter pick, said she was “thrilled” to see Jake’s initiative.

She said: “It’s so great to see young people in the village taking action. I currently have pickers on loan to students from Gillotts School in Henley, who approached me for equipment to litter pick for their Duke of Edinburgh’s Awards.

“The community in Sonning Common really cares about the environment, the success of our annual pick is another good example of this. In 2020 more than 140 people took part.

“Sadly, the pandemic has resulted in reports of a surge of litter and dog fouling. But the upside of lockdown is that people are much more aware of their local environment and taking direct local action is an easy win, because litter is one thing we can all do something about.”

The next SoCo Spring Clean will take place on March 6, 2022.