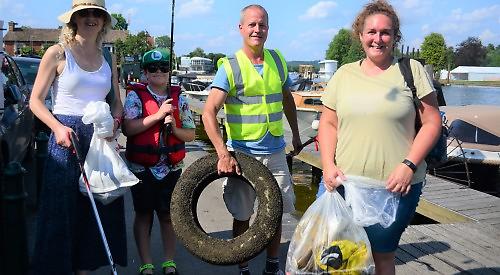 MORE than 60 people took part in a clean-up of the River Thames in Henley.

The volunteers met up on Red Lion Lawn, where they were provided with litter-pickers, high-vis vests and bin bags before setting off on boats and paddleboards.

The event was organised by environmental campaigner Lynne Lambourne, who founded Warriors on Waste in 2012 to help reduce the use of plastic and encourage sustainable living.

Ms Lambourne, from Peppard, said: “It was brilliant. I was so impressed with the number of people who turned up. There was a great community spirit, which was lovely. I was really impressed that people cared enough to come out on one of the hottest days of the year.

“We need to make a difference in Henley — we live on the river and all the rivers run to the ocean, so we have a big responsibility.

“You might look at the river and think it’s all clear and clean on the surface but it’s really not, there’s so much rubbish once you start looking.

“Doing something like this is a good way for people to see what is going on below the surface.

“Our town is so beautiful and attracts so many tourists but, sadly, they leave their rubbish behind.

“Simple things like taking your rubbish home can make a difference but it’s up to everyone — it’s about teamwork. There’s no excuse.”

Sarah Gilbert, who took part in the river clean-up with her children, Joe, 10 and Sid, five, said: “It was fantastic and well-organised.

“We collected a whole bag of rubbish, which we are really proud of.

“It was great for the children to learn about pollution, educate them about keeping the river clean and about how the rubbish in the river floats to the ocean.

“The kids really enjoyed it and had a lovely time but the message was definitely there. We carried on litter-picking on our way home.

“Thanks to Lynne for organising it. People like her are the heartbeat of Henley.”

Town councillor David Eggleton, who joined the clean-up, said: “A big thank-you to everyone who took part. I was expecting a lot more rubbish so this shows that so many other groups doing litter picks are making a difference.”

Boats were supplied by the Henley Boating Company and Willow Basket in Friday Street provided free ice creams to everyone who turned up. The event was supported by Henley in Bloom.

Ms Lambourne, an award-
winning interior designer who uses upcycled furniture and salvaged materials, carried out a clean-up along the riverbank in Henley with her children, Grace and Kate, earlier this year.

She was shocked at the amount of rubbish they found, including plastic bottles, food wrappers, oil cans, Styrofoam blocks and cigarette ends.