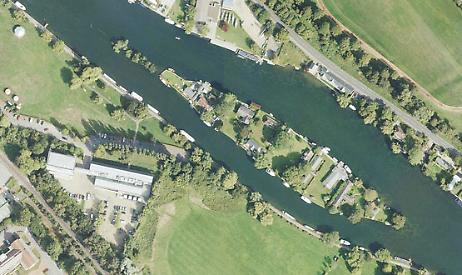 RESIDENTS of a river island in Henley are upset at plans to charge them a mooring fee.

Henley Town Council is proposing to introduce a permit costing £290 per year, or £145 for six months, for people living on Rod Eyot to moor their boats at Mill and Marsh Meadows outside the hours of 10am and 3pm.

This compares with visitors who pay £10 per day or £55 for a week with a maximum stay of 14 days.

Until now, the islanders are meant to have paid the daily fee when they used the moorings but this hasn’t been enforced.

Now the council has hired a specialist company to enforce the charges with regular checks and fines for anyone in breach of the conditions.

Town clerk Sheridan Jacklin-Edward told a meeting of the council’s recreation and amenities committee that the permits would mean residents who frequently use the moorings would effectively pay a reduced rate and not be penalised.

However, residents say they cross the river and moor only for short periods of time to go shopping or to church.

Ann Tully, who has lived on the island for about 20 years, said: “Your costing is based on people staying overnight but we don’t.

“We pop over on a little boat, which is 10ft long, and buy a pint of milk and two hours later we take it home and keep it on our land.

“It would have been somewhat more pleasing if you had approached us and asked us more about river life and what it’s like
living on the island rather than saying we can’t moor.”

Simon Loring, who also lives on Rod Eyot, said: “I am not going to accept anyone putting a ticket on any of my boats as I have a legal right to navigate the Thames and moor for free.

“We are fed up with the council’s attitude and its failure to talk to the people on the river.

“We’re not accepting whatever you’re proposing, which we don’t understand because you’ve never communicated with us.”

All boat users who use the moorings must now register with where2moor.co.uk even during the hours of free use.

Barbara Haze, who part-owns a property on Rod Eyot, said the system was not inclusive.

She said her sister had registered and received a message back saying she wasn’t allowed to return for 72 hours.

“She did it to walk the dog and if you’re walking a dog you need to do so on a daily basis,” said Mrs Haze.

“If you want to get a pint of milk or go to church you have to register. Also my parents, who visit the island, don’t have smart phones.

“There needs to be more thought put into this proposal. It needs to work out so everyone has the access they need.”

Mr Jacklin-Edward admitted there had been some teething problems with the website. He said: “The issue that has been raised about registering and being told you can’t return for 72 hours shouldn’t happen and we need to make sure that it’s sorted out.

“Yes, we do encourage people to register using smart phones but there are systems in place where you can register by calling as well and perhaps that message could be clearer.”

He said the residents should have been paying the £10 a day mooring fee, which had been in place for years but hadn’t been enforced.

Mr Jacklin-Edward said: “If residents wish to access Henley it makes much more sense for them to moor at Mill Meadows at a reduced rate compared with other moorers.

“There have been charges outside these hours in place for years and I don’t believe there have ever been any objections before.

“Technically, they should have been paying a charge of £10 each time they crossed but this hasn’t been enforced and, quite frankly, I think everyone would agree that that wouldn’t be fair.

Councillor Kellie Hinton said she had tried to organise a meeting with residents to discuss their concerns more than a year ago when she chaired the committee.

She added: “You may be a neighbour but you don’t pay council tax to us. If we charged at a weekly rate of £55 it would come to just under £3,000 a year and the proposal isn’t even 10 per cent of that. We have got District Enforcement in on the back of complaints from several residents and now we’re trying to find a way not to penalise them.

“I think the proposal is actually cost-efficient. If you don’t want to use it then fine.

“If you want to come over this side then, yeah, there should be a cost to it. Our residents pay so residents in the next district should.”

Mr Loring was asked to leave the meeting after responding to Cllr Hinton’s comments.

He said: “I’ve had enough of this; you’re going to be in court. You’re breaking the public rules of the towpath. It’s a joke. You need to get lawyers.”

Councillor Ken Arlett suggested a nominal fee of £50 to £100 a year would be more reasonable and Councillor Stefan Gawrysiak said almost £300 was too much when residents had to use the moorings.

Cllr Hinton said: “To me £6 a week, when they should have been charged £10 a day for going outside of 10am and 3pm, is a nominal fee. It makes no sense to have anything less than that.

“If you want to have the privilege of mooring somewhere as busy, expensive and as wonderful as the Henley river bank, which we are spending a lot of money improving, outside the hours where you already get it for free then you should be charged.”

The committee was split in a vote on the proposed new fees with five councillors in favour and four against. The proposal will now be discussed at a full council meeting.