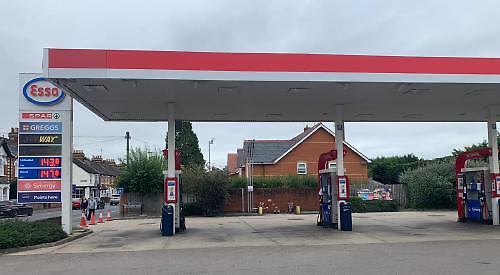 PETROL stations in Henley and surrounding areas have been forced to close or introduce a maximum fuel allowance due to a supply crisis.

Long queues could be seen at filling stations over the weekend after a lack of lorry drivers within the UK caused delays in fuel deliveries.

It is estimated that the UK is short of about 100,000 HGV drivers which has been worsened by the pandemic and Brexit.

The Esso garage in Reading Road was closed on Saturday at about 1pm after signs were placed informing customers that the station was out of both diesel and supreme diesel.

Another sign also read: “Due to the current unprecedented customer demand for fuel and associated supply challenges we have taken the decision to introduce a limit of £30 per customer on all of our grades of fuel.

“This excludes HGV drivers and emergency services. This is a company decision to ensure all our customers have a fair chance to refuel and to enable our sites to carry on running smoothly.

“We kindly ask everyone visiting our sites to treat our colleagues, supply chain partners and customers with respect during these very challenging times.”

The Esso garage in Knowl Hill, Wargrave was also closed over the weekend due to the lack of fuel.

Transport Secretary Grant Shapps told the BBC there was “plenty of fuel” and that the shortage of HGV drivers was “nothing new”.

He said the  "irresponsible briefing" to the press following a meeting with road haulage groups had sparked panic buying.

The Government has since suspended competition law to allow oil firms to target fuel deliveries at petrol stations in parts of the country that need it the most. They are also considering deploying the army to deliver fuel.

Henley MP John Howell released a statement on Twitter saying: "There is no shortage of fuel in the UK. We have increased demand pressures at our petrol stations. That is why we are implementing The Downstream Oil Protocol – a temporary exemption to competition laws to enable information sharing between petrol stations."

The lack of HGV drivers has hit other industries as well including carbon dioxide. Pubs, breweries and farms across Henley feared the shortage in delays would cause them to temporarily close.

The Government has agreed to pay tens of millions of pounds to cover the operating costs of a Teeside plant owned by American company CF Industries, for three weeks.