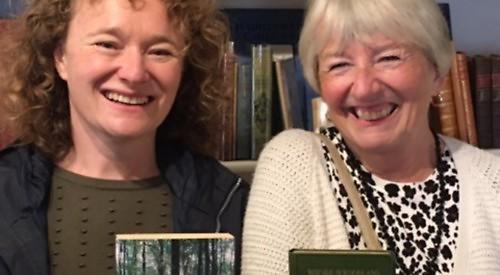 A WOMAN has won a window trail competition that highlighted the loss of UK wildlife.

People were encouraged to find 44 photographs of vanishing species in shop windows in Henley.

The pictures showcased endangered plants and animals such as the natterjack toad, which is declining in the UK due to habitat loss.

Twice she came with her daughter Esther Jacobs, 45, a teacher, of Hemdean Road, Caversham, and once with her husband Anthony.

Mrs Gordan said: “On the initial visit we couldn’t find some of the pictures and we had limited time so we went back home.

“I came back with my husband Anthony on another occasion and we found a few more. Then on the last visit with Esther we only needed to find the last two. I don’t know how long it took altogether as we stopped a couple of times for a cup of tea.”

Mrs Gordan won a £10 gift voucher from Way’s Rare & Secondhand Bookshop in Friday Street and she and her daughter bought two books, Woodlands by Oliver Rackham and a book about trees which was written in the Forties.

She added: “My daughter and I really like competitions and quizzes.”

Alex Richardson, who owns the Henley Pet Shop in Bell Street with her husband Tim, also completed the trail and won a jigsaw map of Henley.

She said: “I did it in one afternoon but it took me longer than I thought, about two hours in total. I went round on my own and I discovered a few places that I didn’t even realise were here.”

The pet shop had its own window display about how pet food can be more sustainable. Mrs Richardson said: “We’re recently started selling animal food made from insects and the whole process uses a lot less CO2.”