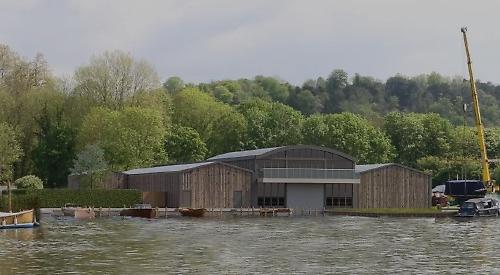 SUPPORTERS of plans to house a collection of vintage boats in Henley are angry at a decision to reject it.

Businessman Adam Toop bought a boatyard off Wargrave Road from Hobbs of Henley more than a year ago and wants to use it to keep almost 40 restored Thames craft in the Rose Toop Collection.

He applied for permission to extend the ground and first floor and raise the roof but Wokingham Borough Council, the planning authority, refused planning consent, saying the development would be “inappropriate” due to the boatyard’s location in the green belt.

More than 100 people registered their support for the application and are now urging Mr Toop to make a fresh application.

Art Themen and Monnik Vleugels, of Wharfe Lane, Henley, said: “We were both dismayed and disappointed to hear that Wokingham council had turned down Mr Toop’s application.

“His proposal is driven by altruism and not by financial gain, as evidenced by his commitment to the Thames Traditional Boat Festival.

“Although Wokingham is somewhat remote geographically from Henley, the council cannot be unaware of the international status of Henley in terms of river activities.

“It is self-evident that the creation of a comprehensive site for traditional boats can only enhance this reputation.

“The collection and improvements to the site would not only benefit the boating fraternity but also the whole of Henley.

“In his application, Mr Toop demonstrates he aims to use wooden cladding and glass to transform an essentially utilitarian industrial building, used to store boats, into a visually appealing structure that would enhance the views from the river and the riverbank. One of the reasons given for the rejection was an alleged change of use.

“It is probably the most extensive and valuable collection of traditional boats in the UK and access to it would be an enormous benefit to Henley.”

Paul Brownjohn, of P A Brownjohn boatbuilders, who is based at the boatyard, said: “I feel the plans would unquestionably represent meaningful improvements.

“It would be taking the yard away from the agricultural-looking farm buildings and back to a wooden-clad building more in keeping with the local surroundings.

“The modified middle barn would also make a superb home for the hugely important traditional boat collection and leave a lasting legacy for Henley and the surrounding areas that have been historically central to traditional wooden river craft.

“The plans and investment would secure the future of the site as a vibrant, viable boatyard. They ensure it would continue to be a centre for marine services that include maintenance, restoration and storage — activities that have been carried out on this site for more than a century.

“My grandfather, father, uncle and I have all worked on wooden boats at this site. I feel I can speak for them all when I observe that to upgrade and visually smarten the yard and to return buildings to a more historical traditional-looking boatyard can only be positive.

“When one includes a nationally significant boat collection and improved facilities for various user groups, the benefits become only more compelling.”

Caroline Bleackley, of Wharfe Lane, Henley, said: “It was bitterly disappointing that these carefully thought-out plans were refused.

“The whole concept to house and display such a unique collection of traditional river craft could be such an asset both to Henley and to all those involved in the Thames Traditional Boat Festival.

“We are indeed fortunate Mr Toop has the vision and I support him.”

Actor Jeremy Irons, of Hill Road, Watlington, said: “I am disappointed that the council has turned down Mr Toop’s plans to build such a magnificent shelter for the Rose Toop collection in a part of the old Hobbs boatyard upriver from the bridge.

“In my view, the residents of Henley and its surrounding area should welcome such an initiative.

“This is a magnificent collection in need of a permanent home and one that can do nothing but enhance the town’s reputation as perhaps the centre of traditional boating on the River Thames.

“The proposed use of this land beside the river is a perfect continuum to its previous use as a boatyard — such sites are hard to find.

“Its proposed design is, to my eye, very harmonious with what stands around and, though modern, is in good proportion with its surroundings.

“Such a collection needs to be housed beside the river upon which its occupants once plied. To be able to do so on a site on the edge of town, where it can be enjoyed by residents and visitors alike on appointment, seems ideal.

“It seems to me that such a magnanimous gesture to enrich Henley’s heritage, as has been offered, at no expense to the ratepayers, should be welcomed with gratefully open arms.”

Henley town councillor and boat owner Will Hamilton said: “I do think that the community definitely wants this boatyard and that it will have a huge benefit for Henley.”

He said the application was refused on a “technicality”, adding: “I hope the planning officers can cross the Ts and dot the Is.”

Henley Mayor Sarah Miller said: “I’m incredibly disappointed that it was refused. It would be such a fantastic feature for Wokingham and Henley and that view from the other side of the river would be amazing.”

Daniel Bausor, chairman of the Make Henley Shine group, said: “Personally, I was saddened to see refusal of this application, which is visionary in sharing and educating on Henley’s traditional boating history.

“This site has been used for boating since time immemorial so it is not a change of use.

“We should be welcoming this application. which would improve accessibility for different groups in the community as well as visitors. Above all, it would enhance the riverside.”

David Worthington, who chairs the trustees of the River & Rowing Museum, said: “I was hugely disappointed that the application was rejected, especially as it was so strongly supported by the residents and organisations of Henley — for the museum it is an opportunity potentially lost.

“The Rose Toop Collection is genuinely world class — that it has a permanent home in a carefully adjusted, operational boatyard is important.

“We remain 100 per cent supportive of the application, notably on its conservation merits.”