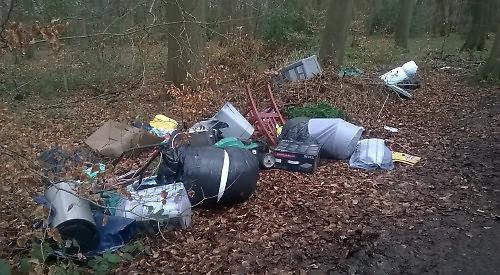 A PILE of rubbish including a chair, old duvets, towels, toys and electrical equipment were dumped in Lambridge Woods, near Henley.

The fly-tipped waste was discovered by Dan Remenyi and John Hill, who own 45 acres of the wood between them.

Mr Remenyi, who lives in Kidmore End, said: “It was a substantial amount of domestic waste, including shoes, toys and electric goods.

“We’ve had this problem before but this time it was more unpleasant because of the amount of waste.

“It’s part of the tribulations of being a woodland owner but it is always very unpleasant. I am aware that people walk their dogs in the woods and I would be grateful if they could come to me if they saw someone fly-tipping.” Mr Hill, who lives in Broadplat, said: “This has been a problem for years and it is a nuisance. In this instance, it looks like someone had been paid to clear a house or a garage but couldn’t afford to dispose of the rubbish properly. It’s absolutely appalling that people think they can treat the countryside like this.”

The incident has been reported to the police.

The pair have previously raised concerns about the impact on wildlife and the deterioration of the public footpaths in the wood, which is a designated Site of Special Scientific Interest.

Mr Remenyi, who bought his land in 2011, said the area was home to orchids but many had been destroyed by people parking their cars on a verge that runs along one side of the wood.

The popularity of the wood with dog walkers had meant more cars were being parked in the area.