Plant a big tree for the planet 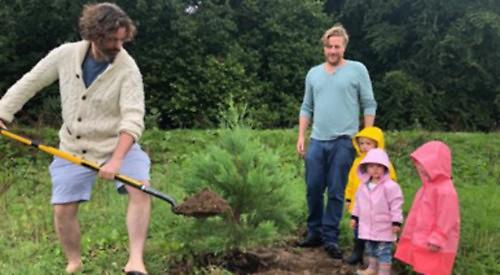 YOU might have seen photos of them. If you are lucky, you may even have visited a forest of these magical giants in California — giant redwood trees, or sequoia.

The Sierra Nevada Mountains in northern California provide an ideal climate for sequoia and this is the only area where they grow in any numbers.

Sequoia trees are extraordinary in many ways. Growing to a height of 115m with a 12m diameter, they may live for 3,000 years.

For comparison, a mature oak tree is about 40m tall and the oldest tree in the UK is thought to be about 1,000 years old.

Sequoia are also extraordinary in another important way for the environment. They are excellent at capturing carbon dioxide from the atmosphere and storing carbon within their trunk.

All trees can do this but sequoia are particularly efficient with a grove of them able to capture 10 times as much CO2 per acre as a natural UK woodland over 100 years.

So what has this got to do with us in the UK? Sequoia were native to the UK before the Ice Age. They were reintroduced by Victorian horticulturist William Lobb, who found them in California and brought back some seeds in 1853, sparking a craze.

Within a few years thousands had been snatched up by wealthy Victorians to adorn their estates.

Sadly, changing climatic conditions in California mean that numbers are declining there at a rate of 10 per cent per annum, with only 75,000 remaining today.

But parts of the UK have the right climate for sequoia trees to thrive and the One Life One Tree project is taking advantage of this by planting sequoia on selected sites here.

I met Henry Emson, founder of the project, to find out more and visit a small local sequoia plantation at Gibbons Farm in Stokenchurch.

One Life One Tree looks particularly for sites that were previously monoculture commercial timber plantations. By planting three native trees alongside each giant sequoia, biodiversity is encouraged and carbon uptake increased.

One Life One Tree is so-called because Henry realised that a sequoia could capture an average Briton’s lifetime carbon-dioxide output over about 250 years.

By buying plots of land and sponsoring a tree, people could offset their own lifetime’s carbon footprint.

Henry says: “Average life expectancy in the UK is about 80 years. The World Bank estimates that over a lifetime, a typical British citizen will have a carbon emission of about 520 tonnes. If we can grow giant sequoias that reach a volume of 500m3 (small by sequoia standards) that will offset an entire lifetime’s carbon footprint.”

Individuals can sponsor a tree to plant via the OneLife website (onelifeonetree.com).

It has proved to be very popular — the first three sites are already sold out but a new one in Abergavenny in South Wales is underway with more suitable sites being actively sought.

Planting a tree is an attractive and easy way to help offset your carbon footprint. If you would like to plant one in your garden Greener Henley is giving away trees. Visit greenerhenley.org.uk

The Woodland Trust is giving away trees to local communities and schools. Visit www.woodland
trust.org.uk/plant-trees/schools-and-communities