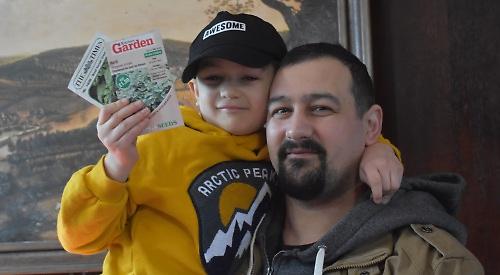 ABOUT 40 people attended a seed swap event at Henley town hall on Saturday.

Tables were set up with different varieties of fruit, vegetables and flower seeds for visitors to take away in return for a donation.

A total of £173.50 was raised for the Heritage Seed Library.

Dave McEwen, chairman of Henley in Transition, said: “The library keeps an archive of old seeds going when companies aren’t interested in selling them anymore.

“The seed swap gives people a chance to try seeds they have never had before. People bring in different types of seeds like runner beans and go away with goodies to plant at home or in their allotment.

“My wife and I have an allotment and we like to grow our own vegetables there. It is hard work but worth it.”

Andrew Tinsley, an environmental scientist who runs a Facebook group called Green Gardens Henley, said: “We started the group in lockdown for seed swaps and to keep old varieties going.

“Today I have bought an old variety of potato called pink fir apple to try something different.” Carly and Steve Watkins visited the event with their son Charlie, seven. Mrs Watkins, who works in the office at Badgemore Primary School, said: “We like to have lots of herbs in the garden, which we use for cooking.

“Charlie is interested in them and sometimes eats them. I give herbs to my horses too.”

Charlie said: “I help Dad find herbs when we have barbecues in the summer — my favourites are chives and baby spinach.”

The surplus seeds will be passed on to Jessica Philbrick, who is to hold a seed swap at the Heath & Watkins hardware store in Sonning Common on March 12.