Neighbours upset at plans for house on ‘too small’ plot 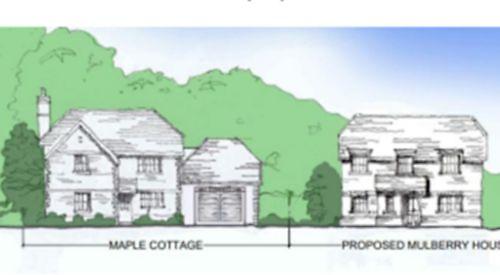 NEIGHBOURS are objecting to plans for a new two-bedroom house in Peppard.

Kulveer Nakhwal, of Iver Heath, has applied to South Oxfordshire District Council, the planning authority, for permission to build the property opposite Maple Cottage in Peppard Hill.

The house would have a private rear garden measuring more than 200sq m and two parking spaces. There would be no windows on the side elevations on the first floor to protect the privacy of neighbours.

Woolf Bond Planning, on behalf of Mr Nakhwal, says: “The proposal will contribute towards boosting the supply of housing and do so in a way that would respect the character and appearance of the area while ensuring future and existing residential amenities are preserved.

“There are no adverse impacts arising from the scheme that could even begin to be considered as to outweigh the benefits of providing a significant boost in housing on this sustainably located site.”

However, neighbours say the site is too small for a house and claim that it had been agreed that the land wouldn’t be developed when permission was granted for three neighbouring properties, Holly Trees, Maple House and Maple Cottage.

Rob Green, who lives next door, said: “When I purchased my property I was told by the developer, the estate agent and the planning authority that this piece of land had to be kept as a green space. This was part of the planning permission that had been granted to build the three houses currently here.

“After a five-year battle with the district council to make the piece of land pleasant and not a wasteland for scrap cars, we finally have what we were promised.”

Andrew Morris, who lives nearby, said: “I object in the strongest possible terms. This piece of land was subject to an enforcement order as part of the original development. If the planning department cannot ensure that their own enforcement orders are met then what hope is there for residents?”

Dominic Rose, who also lives nearby, said: “The proposed property would overlook our garden and is planned to be built on a tiny plot of land which would make it overly congested and increase the already heavy traffic on the B481.”

Neighbour Andrew Tidswell said: “I object to this application as it is clearly overdevelopment of this area. By shoehorning in the proposed property it will take a stretch of extremely busy road from what used to be four properties to 11, rising to 16 when the approved Mulberry House development starts.”

John Kendall, of Hillcrest Lane, said: “It would be an inappropriate development on a very small plot of land. It would be close to my boundary and overlook my property, causing a lack of privacy. The additional development on an already congested site would cause unacceptable density.

“The adjacent B481 is already overcrowded at peak times and further development would exacerbate the problem.”

Kate Pepper, also of Hillcrest Lane, said: “It had been my understanding that the land was assigned for amenity space for the owners of the three recently constructed houses, not for a two-storey house.

“The rear of the building would overshadow my garden and cause a serious loss of privacy.

“The fact that there is only one window in the rear acknowledges that it is not possible to provide bedroom windows which wouldn’t overlook and instead I would be confronted with a blank brick wall.”

The district council will make a decision by April 15.