Developer urged to clean up around building site 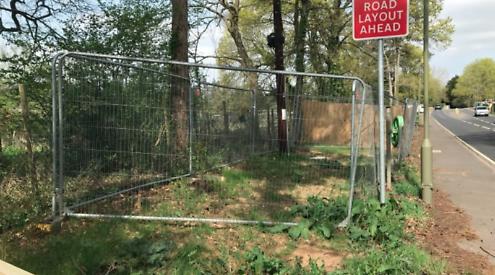 A DEVELOPER has been criticised for leaving its land near Shiplake looking a mess.

Taylor Wimpey was granted planning permission for 95 homes at the former Thames Farm, off Reading Road, in 2017 but has been unable to start construction because its drainage plan has not been approved.

It had wanted to divert surface water along a culvert beneath the main road and into the river near the Jubilee Park sports ground in Henley but South Oxfordshire District Council, the planning authority, said this was “unacceptable”.

Meanwhile, the site has steadily deteriorated with fencing buckling and collapsing in places and an unfinished drainage ditch, weeds and debris, a full skip and an untended green area all visible.

David Bartholomew, who represents Shiplake on Oxfordshire County Council, said the village was “blighted” by the building site.

He said: “Taylor Wimpey have still not submitted proposals for a new drainage solution at Thames Farm, nor have they applied for planning permission for the grouting works. In view of this, it will be many months, probably years, before the matter is resolved — if it ever is.

“In the meantime, Shiplake is blighted by a building site that was abandoned two years ago without proper mothballing, which is having an adverse impact on the area and the lives of residents.”

Councillor Bartholomew complained to Suzanne Malcolm, deputy chief executive of the district council, who agreed to write to Taylor Wimpey asking the company to tidy up the site.

He said his suggestions were to:

• Plant hedging in front of the “unattractive, cheap, close-clad fencing” after it has been repaired.

• Sweep the highway footpaths and remove the weeds.

• Clear and tidy the green area to north of the entrance and remove all the redundant/collapsed Heras fencing from inside and outside the site.

• Remove the overflowing skip and other waste from the site and complete the part-finished drainage ditch after clearing.

He also suggested setting a new deadline for the tree-planting programme that had been halted because of the ground stability issues.

Peter Boros, chairman of the Thames Farm Action Group, said: “The fence is collapsing in places so it is pretty low grade fencing they have put up and there is quite a bit of rubbish there.

“There is still temporary fencing which has been there for two years. If you then add that they have wiped out a long tree belt from the road and not put in any trees, it is a real poke in the eye for the village of Shiplake.”

Mr Boros said it was unlikely that Taylor Wimpey would walk away from the site.

He said: “There is quite a bit of cash tied into that site which they stupidly spent without doing their due diligence and they won’t give that up lightly.

“As far as the action group is concerned, we are on standby in case something further develops and that is what we are saying to the village, so we will keep the finances we have raised because we are not convinced that the end is in sight.

“What I think they should do is start from scratch and look at the whole thing from a different perspective and see that it is not a high-volume housing site and look at a lower number that doesn’t require the sort of drainage and remedial groundwork that it would otherwise require.”

Shiplake Parish Council has also complained to the district council about the state of the land.

Chairman Fred Maroudas said: “It is in an appalling state. It is unkempt and doesn’t conform with the promises they made when they applied for planning permission.

“It is certainly not good enough for a developer who boasts about being a good neighbour.”

A Taylor Wimpey spokesman said: “We are grateful to local residents for raising concerns regarding the tidiness of the site and will be addressing these issues as soon as possible.

“We remain committed to creating a development that benefits the surrounding community.”