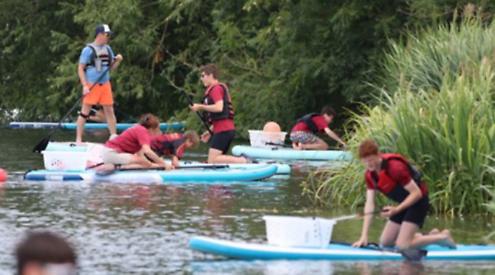 THE first ever clean-up of the River Thames following Henley Royal Regatta took place on Monday.

This followed the biggest ever regatta, which ended on Sunday evening after six days of action attended by an estimated 300,000 people.

Sir Steve said the event was keen to improve its sustainability.

“It is important,” he said. “Most of the regatta stewards have a rowing background and have spent many enjoyable hours on the water, so the environment is important to all of us.

“When you put on an event of this size and stature… if you put on a party in your garden and invite 25 people, how much rubbish is left over from that?”

The 26 volunteers included two regatta competitors from Henley Rowing Club as well as pupils, parents, teachers and the chaplain from Shiplake College.

They were equipped with paddleboards provided by local company Go with the Flo with Andy Irving and Dave Conway on hand to help them.

Litter pickers and collection boxes were provided by Ms Lambourne, who runs Warriors on Waste.

Small teams of boarders paddled gently down the course from the finish line to the start near Temple Island, picking up litter as they went.

Ms Lambourne recorded all the rubbish on an app called the Debris Tracker. She said: “It records what goes into rivers and oceans so that scientists can have a better understanding.”

After about 90 minutes the volunteers returned with waste including plastic bottles and cups, which had been expected, and some more surprising items such as an umbrella, a bra and a tent.

They also found walkie-talkies and a bank card known to one of the volunteers which will be returned to its owner.

“The clean-up has been carried out in true Henley Royal Regatta spirit and I can’t thank enough the contribution and camaraderie shown by the volunteers. The river is central to Henley in many ways and while we don’t own the regatta or the river, we strive to look after it as best we can.”

Ms Lambourne, from Peppard, said the clean-up was a success.

“We got loads of stuff, mainly plastic bottles, as predicted,” she said. “That’s pretty good — I was expecting it to be worse with food packaging and the takeaway boxes.

“I was pleasantly surprised at how clean the river was considering it had just hosted such a significant event.

“As always, the main polluter was the single-use plastic water bottles but we also found glass bottles, paper coffee cups and even an old tent which we managed to haul out of the water.

“There were very few takeaway boxes, which means the bins and waste removal services must have been working.

“Monitoring the state of the river after large events is important as we can learn what type of waste is polluting the river and identify companies that may need to improve their sustainability and the waste disposal systems that they offer.

“It was a fun morning and I was thrilled that Henley Royal Regatta seemed to be doing such a good job hosting an event that takes sustainability to its heart. Thank you to everyone who joined us.”

Kat Green, director of external relations at Shiplake College, said: “We are so pleased to have been able to help Henley Royal Regatta and the local community by providing volunteers to help with the river clean-up.

“It was great to see smiles on faces and teamwork taking place for navigating close to the riverbank to collect the rubbish.

“A number of the pupils have asked if we can make this an annual event and we as a college community will definitely be looking to arrange or help with more river clean-ups in the future.”