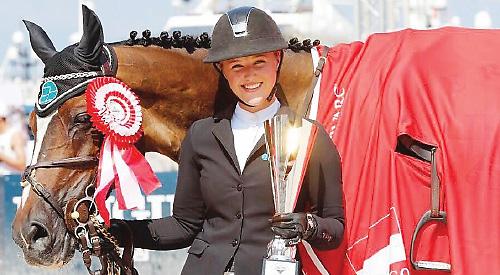 HENLEY showjumper Leonora Smee took the honours at the Longines Global Champions Tour in Monaco on Sunday where she won the 2* Grand Prix following a jump off.

After all 19 combinations had taken part in the 1m45 class event only 21-year-old Smee, riding Waltons Top Flight and American Lilli Hymowitz had managed a clear first round.

In the jump off between the two riders it was the former Rupert House pupil, riding her 14-year old KWPN gelding, who took the honours, finishing in 33.03 seconds compared to Hymowitz’s 33.58 time.

The grand prix had taken place in one of the world’s most iconic showjumping locations in Port d’Hercule, Monte Carlo with the Prince's Palace overlooking the ring from one side and the super yachts viewing from the other.

Speaking after the win a delighted Smee said: “This is certainly one of my favourite competitions. We kicked off with a fourth place in Fridays 1.40m speed class but it was on Sunday in the 1.45m Grand Prix that my Waltons Top Flight excelled.

“After round one I was lucky enough to be one of just two clears, resulting in a head to head jump off with Lili Hymowitz. I was first to go in the jump off and set the target with a clear in 33.03 seconds. Then I had to anxiously wait as Lili took on the jump off.

“She went clear too and as she crossed the finishing line I looked to see the clock telling me her time was 33.58 seconds. This gave me my first 2* Grand Prix win.

“It was an emotional moment that words just cannot describe. With the iconic setting, the sun shining, my parents amongst the spectators, so much wonderful support from the spectators, all in a location which has always been special to me — it was simply a dream come true!”

The last month has been a busy time for Smee as she also competed in the Longines Athina Onassis Horse Show in St Tropez before competing in San Remo, Italy.