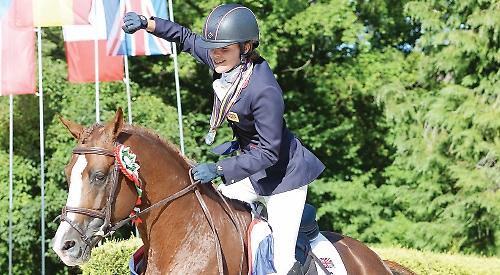 THERE was success last weekend for a Watlington teenager and a Hambleden rider at the European Championships and the national horse show.

An individual gold for Watlington’s Georgina Herrling added to the medal haul for British event riders after a thrilling final day of the European Championships for Ponies in Kaposvár, Hungary.

Herrling led from the opening dressage phase of the three phase competition and scored 40.9 penalties to go into first place on her eight-year old stallion SF Detroit in the championship that brings together Europe’s best young event riders.

A polished performance in the previous day’s cross-country round saw the duo go into today’s final show jumping with no room for error, as just one fence down would see the 14-year-old moved off the top of the leader board, but a perfect clear round secured her the individual gold medal. Herrling’s gold helped Great Britain secure a team silver medal at the championships.

Riding her grey, 10-year-old, pure bred Irish Draught gelding, The Forger, Frampton won her biggest competition to date. The Forger is Frampton’s first show horse and she has only been showing for three seasons. Speaking after her win Frampton said: “Although it was incredibly muddy, Raymond (The Forger’s stable name) just glided along as if the conditions were perfect. He is such a well balanced horse and was able to show this off brilliantly.

“Since starting showing I have had so much support and advice from the other competitors both professional and amateur, everyone has been amazing and the atmosphere is always so much fun.”