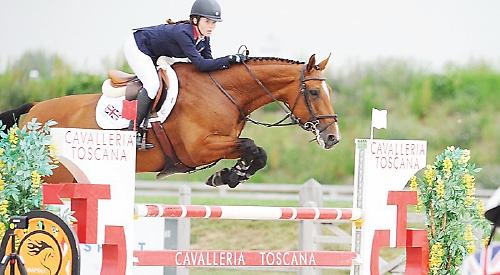 Having picked up zero penalty points during the first qualifier in Samorin, the team faced Belgium
in the gold and silver medal jump-off.

Josie, 14, and her teammates, Angel Tough and Matilda Lanni, went clear in the jump-off as their opponents secured just one clear round and recorded two penalty scores of four.

This meant GB’s fourth rider, Oliver Fletcher, did not have to jump again and the team were crowned European champions, with Poland securing bronze after winning their jump-off with Denmark.

Guy Symons, of Ballards, said: “She is an international and goes all over Europe and this is a big achievement for her, being aged 14.”

Ian Hewitt, senior client partner at Taylorcocks, added: “We have been involved with clients in the equine industry for some years so this was a good fit. Josie’s achievement is fantastic and she has done this against tough opposition.” Josie, who rides Concordette RR, a British-bred, 10-year-old bay mare owned by her mother Julie, qualified for the GB squad at the end of April booking her place at the championships for young riders, juniors and children, held from August 9 to 13. In 2015/16, Josie was crowned county and national showjumping champion.