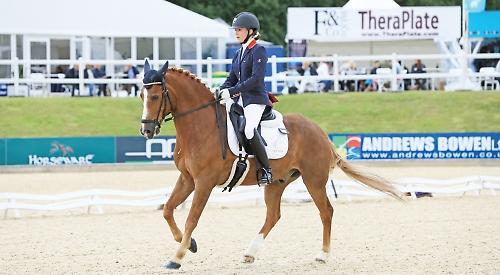 A TEENAGE dressage rider from Nettlebed had a podium finish at an international horse show in Cheshire last week.

Fifteen-year-old rider Jessie Kirby wowed the crowds at the Equerry Bolesworth International Horse Show, in Cheshire, on her pony Grayswood Orlando, where she finished third in the PRB Horseboxes Pony Dressage Invitational competition.

Kirby, a pupil at Cranford House School, has set her sights on competing at a future Olympic Games. Speaking after her third place finish she said: “It was amazing to compete in the big international arena at Bolesworth. It was a dream venue and the atmosphere was incredible. One day I hope to compete at the Olympics for Great Britain.”

Meanwhile Jessie’s mother, Tanya, added: “Jessie works really hard. It’s sometimes a challenge to fit in her training around her school work but it’s a lot of fun and we’ve had some exciting adventures driving across Europe to compete in international competitions.”

London 2012 Olympic team dressage gold medallist, Carl Hester, who was also competing at Bolesworth added: “It’s wonderful to see how all the success at the Olympics is inspiring young riders. That’s the best legacy there is.”