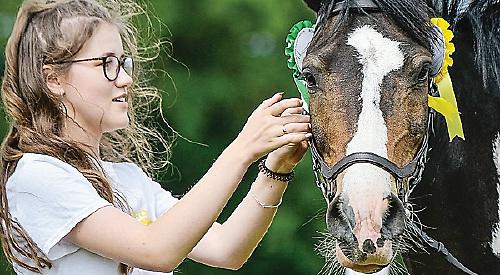 THE Woodland Hunt Pony Club raised £3,562 for the Cystic Fibrosis Trust with a junior horse show, gymkhana and fun dog show on June 16.

The event, which was held at Upper House Farm in Harpsden by kind permission of Mr and Mrs Trevor Swete, was the brainchild of the club’s junior committee who wanted to put on an event to show support for fellow Woodland member Nell Summerley, 15, who has cystic fibrosis.

More than 50 Pony Club members attended the event, taking part in showjumping competitions, fun showing classes, such as prettiest mare and handsomest gelding, and the dog show with categories such as the dog most like its owner and the dog the judge would most like to take home.

A team of parent volunteers and Woodland Hunt senior members helped to run the day with Nell taking the lead on the showjumping commentary, providing encouraging support and handing out the rosettes to the winners.

Cystic fibrosis is a life-limiting genetic condition affecting more than 10,000 people across the UK. It affects the lungs and digestive system and can cause chronic infections and reduced lung function. Currently, half of those with CF will not live past age 41.

Nell is pictured above along with her brother Jack.