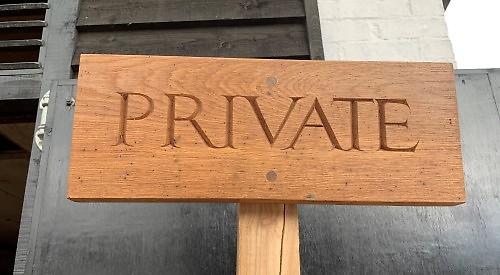 A HANDCRAFTED oak sign was stolen from Checkendon Equestrian Centre.

Jennifer Greenbury, who owns the complex in Lovegrove’s Lane with her husband Toby, said the engraved sign read “Private” and had been positioned on the corner of their woodland a few yards from Main Street.

The sign, measuring about 18in long and 7in wide, was unscrewed from its stake. The theft happened between September 3 and 5. Mrs Greenbury said it had made her “cross” but she had not reported it to the police.

Meanwhile, a gate lock was broken and diesel was siphoned from clients’ horse boxes on or around August 20. Some of the lorry locks were damaged and one had its windscreen shattered.

This incident was reported to the police.

An antique white bench was also removed from the centre’s grounds and later found in a hedge behind the cricket pitch.

Various stakes denoting where horses and others shouldn’t ride, or where grass has been recently sown, have gone missing or been broken.

The couple’s grandson built a fort out of logs and this has been destroyed twice but rebuilt.