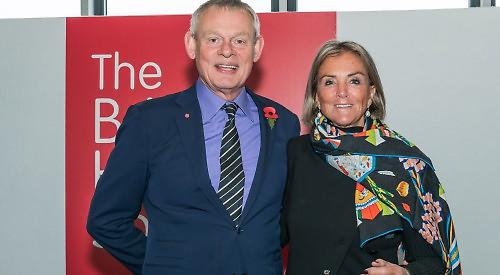 A WOMAN from Harpsden who rescues and rehomes horses has won an award.

Suzi Swete, 71, was nominated by members of the Woodland Hunt Pony Club, which uses her land for riding and events.

The British Horse Society award was for “excellent service by an individual in the cause of equine welfare” and was presented by the actor Martin Clunes, who is president of the charity.

Mrs Swete, a retired teacher who lives with her husband Trevor, 76, has been rescuing horses for about 15 years.

She said: “It was lovely that people voted for me but I have to say that I do feel guilty about having an award as this is my hobby and passion.

“I also feel very lucky to have such a supportive husband who allows me to do this as it’s not a cheap enterprise.”

The Swetes, who have three children and six grandchildren, have lived in Harpsden for about 30 years and have 140 acres of land.

They first allowed their land to be used by the pony club about 25 years ago after a request by Posy Knapp, one of the club’s coaches. Mrs Swete said: “I’ve been involved with horses and ponies all my life and my children were members of pony clubs when they were younger.

“Posy just approached me one day and asked if she could use a back field and since then the club has grown and we now have a cross-country course. These days it’s difficult to find space to ride horses without it costing a fortune and we do it for free so we’re sort of the home of the club.

“I became very involved and was district commissioner of the club for about three years.”

She first began rescuing horses when she was approached by someone with one that they couldn’t ride anymore and saw potential to retrain and rehome the animal.

Mrs Swete said: “I have a thing where I will take on a pony but I’ve got to be able to see that it can be nursed back to health, broken in, educated and then moved on.”

Over the years, she has rescued up to 60 horses and they have all been rehomed except six that have stayed with her.

“I was never going to be a sanctuary,” said Mrs Swete. “I always knew I wanted to give them a new life and that’s what the society wants to promote — the idea of new life. One pony I have is with one of my granddaughters and it’s doing eventing at a high level. A lot of them have gone on to trot around with little riders.”

On one occasion she was asked to rescue 30 horses which had been left in a field. “Some had to be put down,” said Mrs Swete. “You have to do what’s best for them.

“It’s heartbreaking as you can nurse them for months, even a year, and then find out they have a dicky heart or they’ve lost the plot but thank God the vast majority have been able to be rehomed.

“Another example was travellers who had dumped some ponies in a field and a lot were dead — it was a horror story.

“Someone from the Phillimore family got involved and asked if I could take six of them.

“One of these is now the top eventer with my granddaughter and another was a little coloured cob that was so successful in our club and won an area championship. The other four were rehomed as well.”

Mrs Swete said she cries when the horses are rehomed but nothing makes her happier than seeing them go on to be successful.

She will continue her rescue work and helping the pony club.

“The club has gone from strength to strength and they have such good fun,” she said.

“It’s very important for landowners or people with space to help accommodate clubs.”