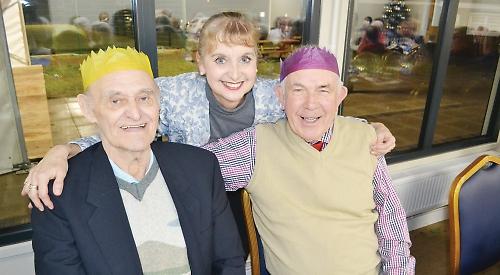 PERFORMING for a room full of festive revellers can be hard work as one clarinet player found out at the Mayor of Henley’s Christmas party for the elderly.

Luckily, a chair was on hand for Dennis Saunders to catch his breath during his lung-busting set as he entertained guests at the annual celebration held at the new-look clubhouse at Henley Rugby Club instead of the town hall.

He was one of about 90 people to attend the party on Wednesday last week.

After guests were served sandwiches and trifle with sherry and wine, Mr Saunders took to the floor for requests, including Daisy Bell, Show Me the Way to Go Home and My Old Man’s A Dustman as the audience sang along.

So many people shouted out suggestions that Mr Saunders ran out of breath after several songs and told guests he would have to sit down.

But he refused to cut short his set and continued to perform for the audience throughout the afternoon.

Mr Saunders also led the room in a rendition of Happy Birthday for Chas Cooper, a resident of the Acacia Lodge care home in Quebec Road, who turned 90 on Friday.

There was also a game of bingo and a raffle with prizes including chocolate, a bottle of Digby Leander Pink brut, a meal for two at the Angel on the Bridge pub and a bottle of whisky, which was won by Dave Allen.

Town councillor David Eggleton dressed up as Father Christmas to hand out presents.

The old folk, some of whom came from care homes, were welcomed by the Mayor Julian Brookes and Rev Canon Martyn Griffiths, rector of Henley with Remenham, who said grace before the food was served.

The guests were arranged on three long tables and the room had been decorated by council staff.

Cllr Brookes said: “I enjoyed it and so did all the people who came. The entertainment was great and Dennis was just the right age to have all the tunes which were being requested at his fingertips. At the other end of the age spectrum, the carol singers from Rupert House were great and it was impressive that children of eight, nine and 10 can perform so well in front of such a large audience.”

Many of those who attended had been to the party in previous years and said how much they enjoyed it. Mr Cooper, 90, said: “I’ve very much enjoyed it. This is the first time I’ve come and I’ve made some friends.

“It was nice to get played Happy Birthday by Dennis. He often comes to Acacia Lodge to perform.”

Colin Saggers, 73, of Watermans Road, said: “It was marvellous and the choir were very good for their age.

“I’ve been in Henley for 48 years and this is my first time at the rugby club!”

Brian Scrivener, 82, of Elizabeth Road, said: “The whole thing is very good quality and the food and drink was excellent.”

Ted Doughty, 86, of Albert Road, said: “I’ve been coming for three years, it’s something I really love. The atmosphere is lovely but I have to say the best bit is the company.”

Maureen Fowler, 83, of Hanover House, added: “It’s my third time and it’s always lovely. I’ve enjoyed the atmosphere and the children singing and the food is always delicious.

“It’s wonderful of Henley to put something like this on and to think of the old people.”

Mick Martin, 71, of Vicarage Road, said: “It’s my first time and I think the food was the best bit.

“I’ve played rugby down here before so it’s nice to be back. The new clubhouse is a lot different from the old sheds I used!”