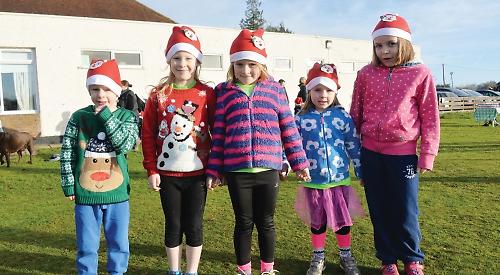 The run was open to children aged three to 11 who had to complete laps of a course while wearing festive fancy dress. The under-sevens ran a mile and the older children two.

Pippa Bodeker, the school’s head of PE, led a warm-up session before starting the race.

The winning junior was Joshua Sudbury, seven, while the winning senior was 10-year-old William Gordon. Everyone who took part received a medal.

Parents acted as marshals and served refreshments including bacon and egg rolls, cakes and hot drinks to spectators.

“There was a great community feeling and we’ve had nothing but positive feedback.

“It even attracted people who don’t live in Woodcote but wanted to watch their grandchildren taking part.

“We’ve been asked to hold it again next year and we’re very keen to do that.”

Another £2,000 was raised at the school’s Christmas fair held the previous evening where parents, pupils and local businesses had stalls selling a variety of festive produce.

The money will go towards a new outdoor learning area and school trips.

The association is now considering an Easter-themed fun run, which would also take place on the green.