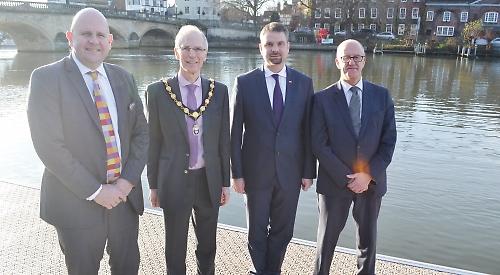 THE Slovenian ambassador to Britain visited Henley to mark the fourth year of the town’s twinning with Bled.

Tadej Rupel, who previously attended the Henley Royal Regatta in 2014, had lunch at Leander Club with Mayor Julian Brookes, Deputy Mayor Will Hamilton and Steve Bennett, chairman of the Henley Bled Twinning Association. He was then given a guided tour of the town, including the Brakspear miniature brewery at the Bull in Bell Street.

In the evening Mr Rupel hosted a wine tasting event at the River & Rowing Museum in Mill Meadows with 40 bottles of Slovenian wine.

He said: “This is a Christmas celebration but also to reaffirm the strong relationship between the two towns. Bled has a tradition of rowing with lots of competitions and is also one of the top tourist attractions and most picturesque spots, as is Henley.

“We are trying to engage people, so it’s important to have this connection between Slovenia and the UK.”

Henley is one of just three places in Britain to be twinned with a Slovenian town and the most recent. Representatives from the two towns regularly visit one another and the Henley Symphony Orchestra is set to perform in the festival hall in Bled, a 512-seater auditorium on the shore of Lake Bled, next year.

Cllr Brookes said: “Bled has a strong connection to Henley as it’s a serious rowing town.”