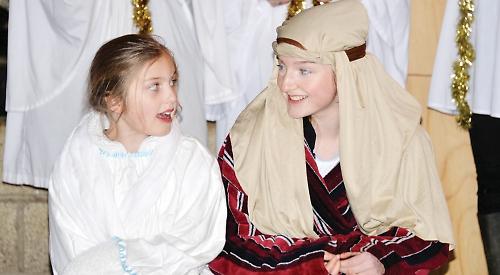 TWO sisters stepped in at the last minute to play Mary and Joseph at the third annual Nativity play held in a stable at Shiplake Farm.

Mia, 11, and Anya Boys, 13, were given the roles with less than a day’s notice after the two adults who were due to appear dropped out due to illness.

The girls, whose grandmother Pam Gordon is associate priest at St Peter and St Paul’s Church in Shiplake, only rehearsed at their home in Hawthorne Road, Caversham, the night before and on the morning of the show.

Rev Gordon, who lives with the girls and their parents, Geoff and Beki Boys, said the play might have been cancelled without their help.

She said: “We didn’t have any stand-ins so they were the first people I asked and they were very willing. They’ve both been in plays at school so they aren’t particularly fazed at getting up in front of large groups of people.

“They enjoyed taking part and were willing to accept whatever costumes we had available. It was a big ask for them and they really deserve credit for showing such support.”

About 500 people attended Saturday’s free hour-long show, which was narrated by the vicar of Shiplake Rev Robert Thewsey and performed by members of the united churches of Shiplake, Dunsden and Harpsden. The spectators were greeted by volunteers dressed as angels and given mulled wine, cakes and mince pies before going inside to sit down on hay bales. Many children were dressed as shepherds, sheep, camels or stars.

Rev Thewsey read out a poem telling the story of the creation and the birth of Jesus, which God made happen to “turn sad into glad again”. The audience were encouraged to cheer whenever he read a happy line.

The congregation sang carols including Who Put The Colours In The Rainbow? Silent Night and While Shepherds Watched Their Flocks accompanied by a “choir of angels” and Stuart Colam, of Blandy Road, Henley, on keyboards. Bells were rung as the audience sang Little Donkey and a miniature donkey called Marble and a miniature Shetland pony called Max were led around the stable by Annabel Thompson, of the Basil and Crew mobile farm.

Mia, a pupil at Caversham Park Primary School, and Anya, who attends Chiltern Edge School in Sonning Common, then got up on stage and sat beside the crib.

As everyone sang Away In A Manger, they flashed torches and their mobile phones at the ceiling to create a “starry night”.

A large cardboard star fitted with flashing lights was then hoisted into place above the scene.

Children in the audience joined the cast on stage for the final carol, Hark! The Herald Angels Sing. The production was inspired by St Francis of Assisi, who held the first Nativity play in 1223 with live animals. It was organised by Maggie Atkinson, of Queen Street, Henley, with the help of about 60 volunteers.

The barn usually contains cattle and stacks of hay but was cleared out the night before by farmer Stephen Doble.

There were two performances, one in the morning and another in the afternoon, each of which was attended by about 250 people.

Collections were taken for the Margaret Clitherow Trust, which supports people living in poverty or other vulnerable conditions.

Rev Gordon said: “Mia and Anya did incredibly well and we’re all proud of them.

“They really got into the spirit of it and Mia even came up with the idea of dropping her bowl in fright when the Angel Gabriel appeared.

“I’m delighted with the response from the community. This seems to have grown and grown each year and the morning performance was much busier than last time.

“From the comments we received, I’d say people had a fabulous time. They were coming out with a real buzz.” Rev Thewsey, who took up his appointment in September, said: “People have been saying lots of positive things and there was a very happy atmosphere throughout.

“We couldn’t have done this at my last church in Cornwall as it was too remote.

“ It’s a fantastic idea and really highlights what it must have been like for Mary and Joseph. It’s a fun but effective way of spreading the Christian message.”