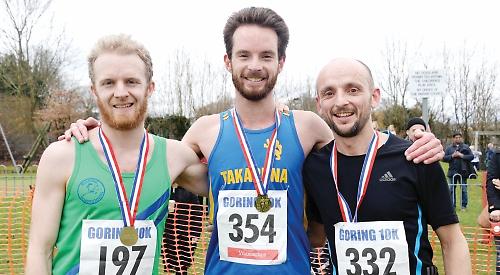 Almost 900 people took part in the event on Sunday, which started outside Storton Lodge in Icknield Road at 11am.

The runners, who came from around Britain, followed a circular route in countryside to the north of the village and finished on Bourdillon Field behind Goring Primary School.

The race was started by Zara Harris, nine, who is a pupil at the school and has twice won British Cycling’s southern regional championships in the BMX category.

Goring fire station, which is near the start line, was open to the public and children could see inside the fire engine.

Runners were chip-timed and presented with medals when they finished.

The first home was Stuart Grange, 29, of Takapuna Harriers in New Zealand, in just over 34 minutes.

He is currently based in York but used to live and work in the area and was competing in the race for the second time.

He was followed by Rob Corney, of Reading Roadrunners, who finished in 34 minutes and 38 seconds, while Simon Gill, from Bognor Regis, crossed the line just four seconds later. Mr Corney, who manages the Sweatshop running supplies shop in Reading, won last year’s race after finishing the course nine seconds faster than this year.

Mr Grange said: “I know South Oxfordshire very well and the Goring 10km was the highlight of last year’s running calendar so I thought I’d come back and enjoy a weekend in the village.

“I came fourth last year so it’s quite an improvement and I’m very proud.

“Goring is one of my favourite places in the UK so it’s great to be back. I had quite a good battle with Rob for the first 4km but I managed to get the lead after that.

“My time was a bit slower than I’d have liked but it’s a tough, undulating course and that first kilometre uphill really takes it out of you.”

The first woman was Jessica Gibbon, 20, from Rotherfield Greys, who finished 23rd overall in 38 minutes and 53 seconds.

She was the first woman home in 2014 when she was placed second overall in 36 minutes and 52 seconds. She set a new record in the women’s junior category, which remains unbeaten.

Miss Gibbon said: “It was really great fun but I found it far tougher this time because of the wind, especially in the first uphill section.

“I’m glad to have won again and really enjoy taking part in this race. It’s challenging but it’s lovely to run around the beautiful countryside.”

The second woman was Mary Grace Spalton, 40, from Lewknor, who came first in the women’s veterans category with a time of 42 minutes and 34 seconds.

She said: “It was great. I’ve done this four or five times and it’s one of my favourite races.”

The event, organised by the school’s parent-teacher association, raised more than £20,000 for outdoor play equipment.

Race director Nick Slade said: “It was another wonderful day with mild weather that made for good running conditions.

“We had more than 100 volunteers, including lots of children from the school, so there was a great community atmosphere.

“This year’s runners ranged in age from 15 to 79 and we were delighted to present awards in both the men’s and the women’s grandmasters classes.”