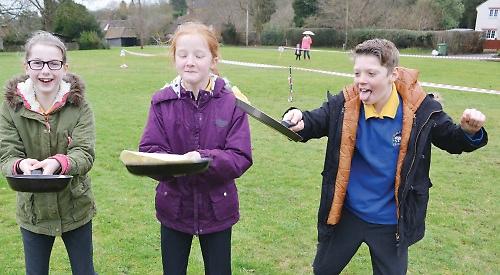 HEAVY rain failed to dampen the spirits of dozens of children who took part in the annual Shrove Tuesday pancake races in Stoke Row.

Children from the village primary school and their parents took part in the event on Tuesday, wearing coats and anoraks.

They had to run the length of a course on the village green, flipping their pancake in a frying pan twice on the way.

There were races for all the year groups as well as for toddlers, mums and dads, grandparents and teachers.

The rain made the grass slippery and several competitors fell over in the wet conditions, while others lost their pancakes mid-race.

The event was organised by the school’s parents’ association and Stoke Row Independent Chapel.

Members of the association cooked hot pancakes for all runners after the races.

Chairwoman Louise Chater said: “We invite the local community down to watch the races and all 93 children take part. It’s a tradition and gives a great community feel.”

Headteacher Charlotte Harris added: “The children really enjoyed it despite the conditions.”