New village community choir starts off on the right note 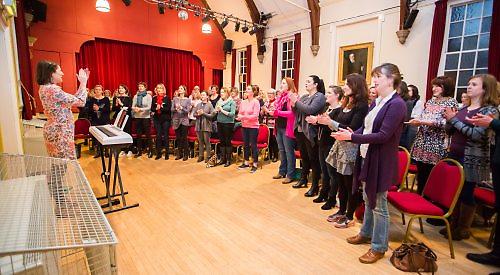 MORE than 60 people attended the launch of a new Wargrave choir.

This included a free taster session led musical director Nicky Jerrome where singers as young as 16 took part in a warm-up exercise before performing Lean On Me by Bill Withers.

The choir has been started by Kirsty Andrew and its first public performance will be at the Wargrave Village Festival in June.

Mrs Andrew said: “The launch night was absolutely fantastic. It was a free taster session for any locals to come along and was for all ages and abilities. For a first evening I was delighted and very proud with the turnout, especially considering Wargrave is only a small village and we are also competing against other choirs in the area.”

Rehearsals are now being held at Robert Piggott Infant School in Beverley Gardens on Tuesdays from 8pm to 9pm. Membership costs £45 or £75 for two adults from the same address. There are also session fees of £20 per month.

Any profits go towards Music and Me, which offers bursaries and scholarships to young musicians.