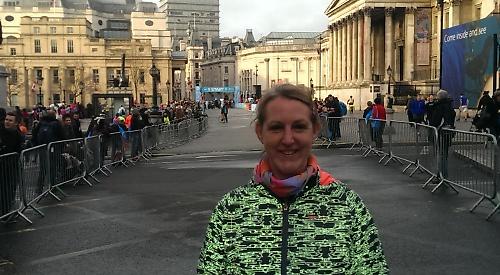 RUNNERS from the Henley area are getting ready to take part in the London Marathon next month. They will be among the tens of thousands of people, from elite athletes to fun runners, joining the race on April 23. All are raising money for charity. CONNOR McLOUGHLIN reports.

DJ GARY BOYS, 43, will be running the marathon for the second year in a row in memory of his partner Claire Peacock.

She died after suffering a brain aneurysm in a shopping centre car park in Aylesbury in March 2014.

Last year he raised £10,000 for the Claire Peacock Foundation, which raises money for the NSPCC as Ms Peacock was a social worker and ran a child protection team for Buckinghamshire County Council.

Mr Boys, of River Terrace, Henley, hopes to raise the same amount again and beat his race time from 2016, which was five hours, 59 minutes and 45 seconds.

He said: “Claire’s legacy was to save vulnerable children from what she would say to me were vulnerable parents and this is my way of continuing that.

“Despite all our best efforts, we live in a society where our children are still vulnerable. The perfect example of this was the recently uncovered historical abuse in football coaching after a number of ex-players broke their silence.

“ChildLine had to create a call centre in a response to these shocking revelations and to support other people who also came forward.

“This is where the Claire Peacock Foundation comes in as money is always needed to support these issues and I want to make sure the money is there to continue that legacy.

“That’s why I’ll be putting my body through the pain on April 23.”

To help his fund-raising. Mr Boys has organised a silent disco at the Angel on the Bridge pub in Henley tomorrow (Saturday) from 7pm.

Tickets cost £9 and can be bought at the pub, online at http://bit.ly/SilentDiscoHenley or by emailing gary@gbconsultancy.co.uk

Mr Boys said: “I’d like to say special thanks to Mark Dunlop, landlord at the Angel on the Bridge, Mike McTeague of Lulu Marquees and to everyone who is helping to make this a fantastic event.”

She chose the charity as her mother Madeleine was diagnosed with chronic lymphocytic leukaemia in 2009 and she still needs regular check-ups.

Miss Farmar said: “When I found out about the diagnosis I fel a bit helpless as I didn’t know anything about the disease.

“It’s one of those things where you can’t see it and people don’t understand what suffererers are going through.

“With the timescale being unpredictable, there is a lot that is unknown which can be difficult, especially for my Mum. Leukaemia Care is my choice of charity as it offers invaluable advice and information for those facing blood cancer, helping to ensure they get the support they need.”

Miss Farmar, who works for a London advertising agency, hopes to complete the 26.2-mile course in under four hours.

She said: “Training is going great. I have been running four to five times a week.

“One of the sessions is with my workplace run club where we do interval training around Regent’s Park, so it's great to get out with a group of people as well as training on my own.”

ACTRESS JO SOUTHWELL, who founded the Henley Fringe festival, is raising money for Alzheimer's Research UK. She chose the charity as her father Alan Kelly suffered from the disease.

In 2012 she released a short film called Holding On, which tells the story of a man’s struggle with
Alzheimer’s.

Mrs Southwell, from Aston, said: “In September the charity got in touch to offer me a place in the marathon and it seemed to fit because of it being the 10th anniversary of my dad’s passing. It felt like something I should really do.

“Two years ago I damaged two discs in my back and didn’t think I would be able to run again but I did strength training with my stepson Joe, a personal trainer, and that helped me get back on my feet.

“I’m grateful to everyone who has run with me, especially Jenny Brown and Annette Crick, who are both seasoned runners who have been taking me out.

“I just wanted to finish at first but now I’m getting competitive and would like to do it in four-and-a-half hours.” To donate, visit www.justgiving.com/fundraising/
Jo-Southwell4

TAKING on the marathon is the culmination of a 16-month journey for ANDREA PEART, from Remenham.

She took up running in late 2015 when she completed the “couch potato to 5km” challenge.

Since then she has completed a 10km and she took part in the Reading Half Marathon earlier this month.

Mrs Peart, 45, an HR consultant in London, said: “I really enjoyed the challenge of running. I started because I was working 16 hours a day, going to London and back and working on the train, and felt like I was being a sloth not doing any exercise.

“I thought it was time to turn my life around and running would be good for my wellbeing.

“When I did the first 5km I was probably walking some of the time but now I can do 19km or 20km without aching the next day.”

She has chosen to raise money for Sports Aid, a charity which supports and funds aspiring Olympians and Paralympians.

POLICE officer IESTYN LLEWELLYN, from Goring, will be taking part in four marathons, including London, this year to mark his 40th birthday.

He hopes to raise £2,500 for Daisy’s Dream, the Twyford charity that supports children and their families after bereavement.

He said: “My father remarried in Wales and his wife unfortunately died of cancer.”

Five years on, his wife Alex was diagnosed with bowel cancer, although she was later given the all-clear.

Mr Llewellyn said: “I did not know about Daisy’s Dream then but I wish I had. They would have been able to help with the kids. It’s an incredible charity.

“I’m aware of the work they do locally and I know they have supported a number of families. The £2,500 will make a massive difference to them.”

Mr Llewellyn, who has two daughters, Morgan, 12, and Gwen, eight, has previously raised around £10,000 for the charity with a fund-raising dinner and by taking part in the London Marathon two years ago and the Paris Marathon last year.

He has also helped organise the Rotary Club of Pangbourne’s Christmas float through Goring for the last two years from which some of the proceeds go to Daisy’s Dream.

As well as the marathons, he is planning to hold a disco and a quiz night to raise more money.

To prepare for his challenge, Mr Llewellyn has been going on training runs and he trains two or three timnes a week with Wallingford Triathlon Club, of which he is a member. He also cycles and swims to keep fit.

However, he has not set himself a time to finish in London.

“Slow and steady wins the race for me,” said Mr Llewellyn. “I run as a hobby and for work.”

Daisy’s Dream fundraiser Claire Rhodes said: “This year, we have eight runners taking on the London Marathon and we are so grateful to Iestyn and the others for the miles they put in, plus the support of their friends and family.”

l Are you taking part in the London Marathon? The Henley Standard would like to hear from you. Call the newsdesk on (01491) 419444 or email news@henley
standard.co.uk