Hundreds queue to snap up tickets for the village festival 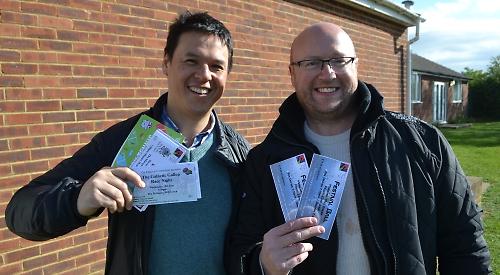 HUNDREDS of people queued up to buy tickets for this year’s Wargrave Village Festival.

Long lines of people formed outside the scout hut off East View Road for the festival’s ticket day on Saturday.

Residents began queuing before the hut opened at 9am and many brought along camping chairs to sit on while they waited and others had dogs with them.

Despite the sunny weather, many people were wrapped up in hats and scarves.

Inside the hut volunteers sat behind rows of tables, selling tickets for the festival’s 42 events, which include a jazz night and a performance of William Shakespeare’s The Merchant of Venice.

This year’s festival, which has the theme of “out of this world”, will be held over three weeks in June. Other events will include the traditional village 10km race, the festival parade and a football tournament.

The biennial festival was founded by former Wargrave vicar Rev John Ratings, who died in 2014, and was first held in the summer of 1975.

Festival chairman Graham Howe said: “There were hundreds of people and the queue went right around the corner on to East View Road.

“No events are completely sold out but a number of them are very close and will sell out easily.

“Everything is well on the way. There are 42 separate events with 22 different participating village societies. We are looking good.”