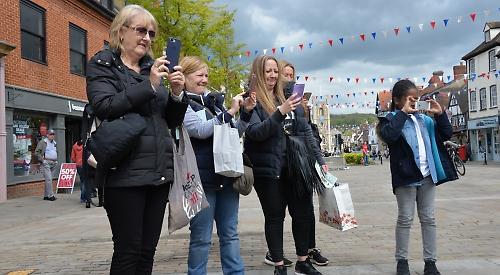 TWO dogs were “married” in Henley on Saturday, even though one didn’t seem very keen on the idea.

Cookie, a chug (chihuahua-pug cross), and Frank, a bulldog, had just agreed to their vows when the former ended up being sick.

The ceremony took place in Falaise Square and was conducted by Roy Mupoto using a megaphone.

An impromptu crowd gathered and some people filmed the service on their phones.

Cookie, who is owned by Harleen Ubhi, from Milton Keynes, arrived in a white Bentley Flying Spur with a personalised “I woof you” number plate. She was wearing a white wedding dress.

Frank, who is owned by Kayleigh Robinson, from Marlow, was dressed in a tuxedo.

Conducting the ceremony, Roy said: “Frank and Cookie, your marriage today is the public joining of your souls that have already been united as one in your hearts.

“Marriage will allow you a new environment to share your lives together and to face life and the world, paw-in-paw. Let your marriage be a time of waking each morning, needing to go for a walk and falling head over tail for each other, again and again.

“With the sharing of this treat, I now pronounce you man’s best friend and companions for life.”

At the end of the ceremony, the crowd cheered and applauded.

Harleen said: “It was so nice to see my baby married — she looked so lovely in her veil and hasn’t stopped smiling or wagging her tail since!

“Frank is such a friendly, caring dog and I’m sure he will make a great husband and lifelong companion for Cookie. I’m definitely a proud mother of the bride and will be looking forward to becoming ‘Grandma’ to their pups.”

The newlyweds, who have been courting for two years, will have their wedding reception next Sunday at the BoShow Wedding Festival.

The marriage was to promote the event at the Culden Faw Estate in Hambleden.

One spectator was thinking even further ahead, joking: “Imagine what their puppies will look like!”

I’m wondering what you call a chug-bulldog cross!