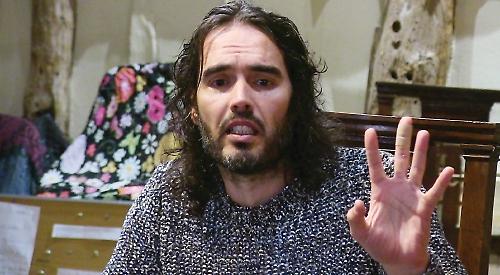 RUSSELL BRAND told how he saved a fox cub as he was driving home on Sunday afternoon — and got a nip for his trouble.

He was on the A4155 Marlow Road when he saw the animal in the road and stopped to help it.

But when he went to pick it up the fox bit him on the middle finger on his left hand.

Brand said: “We were coming along the road and there was this tiny fox — it was very, very young.

“It was so sweet, it was smaller than a pound puppy. It was tiny.

“A few other cars were stopping and I thought I’d better do something about it. I was worried about picking it up so I took off my jumper to carry it in.”

Brand, who wrapped the animal in the jumper before returning it to the woodside verge, said: “I picked it up to rescue it and it bit me on the finger. I figured it was scared because it was away from its mum and on the road.

“I had to go to the hospital to have injections and had to have a saline drip in my hand.” He said that his jumper smelled “very, very badly” afterwards.

Jessica Sierpowska, who was in one of the other cars, witnessed the incident.

She said: “The traffic stopped for a while as animal rights hero Russell Brand saved a wayward fox cub from being run over on Marlow Road. Thumbs up, Russell!”

Brand said that a nurse called Shaun treated his wound while he tried to order an Indian takeaway meal.

He said: “Shaun heard me trying to order it and told me I couldn’t have Indian food with the medication I am on!”