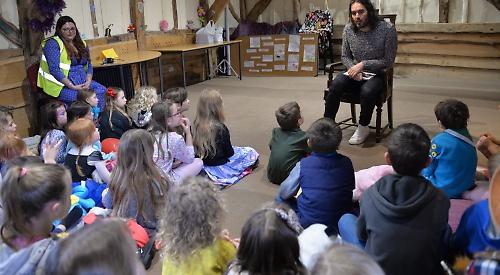 RUSSELL BRAND gave a secret reading to a group of children at the Henley May fayre.

The comedian, who became a father last year, agreed to be the “celebrity Jackanory” reader for the winners of a competition — as long as he wasn’t named in advance of the event on bank holiday Monday.

He had the 30 children and their parents in fits of laughter as he told them funny stories about himself and his baby daughter Mabel and read from his 2014 book, Trickster Tales: The Pied Piper of Hamelin, his modern take on the classic children’s fairytale.

The children won “golden” tickets to the event at King’s Arms Barn as a prize in the competition run by the fayre organisers for which they had to name their favourite story or book and say why they liked it.

Brand, 41, who lives near Hambleden, was introduced by town councillor Kellie Hinton, who helped organise the fayre and asked the children: “Are you excited to see him? We’re going to have to see some excitement or he might leave.”

But she was interrupted by the comedian who said: “That’ll do, I’ll take it from here.”

He encouraged the children to applaud Councillor Hinton, who had decorated the barn with feather boas, a dreamcatcher, cuddly toys, heart-shaped balloons and a display of the winning entries.

Brand, who was accompanied by his partner Laura Gallagher and Mabel, introduced himself and chatted to the children, asking their names and ages and thanking them for coming.

He said his neighbour Dick Fletcher had encouraged him to become involved.

“My understanding from Dick is that this is for a good cause — for the Henley May fayre,” he said. “That’s a lovely cause. We are participating in the May fayre.

“I suppose May Day has traditions in paganism and pre-monotheistic religions of this country — back when we worshipped the land and the animals!”

Brand asked the children about their pets and told them about his own, a dog called Bear and cats Jericho and Morrissey.

He also recalled owning a rabbit when he was growing up in Essex.

“The rabbit bit me and it really, really, really hurt,” he said. “I had taken it to the newsagent, which was not conventional because rabbits don’t usually need walking.”

Brand asked the children if they had ever been bitten by any animals and compared stories with them.

“I’ve now been bitten by a mouse, a fox, a rabbit and dogs,” he said. “I’m being attacked by all the mammals. A lot of us are getting injured, it’s an epidemic, it’s out of control!

“We are all being bitten, some of us by numerous species. Yet we love the animals regardless of this because we understand they don’t mean it.”

Using names for the children such as “sausage”, “darling” and “sweetheart”, he complimented some of them on the fancy dress outfits they were wearing for the fayre before reading from his book.

He said: “The Pied Piper is what’s known as an archetypal fairytale. That means stories like it have always been around even when your parents were younger!”

The children giggled at this.

Brand then told them how important it was for them to read.

He said: “Books are fun, you learn more and it calms you down. Learning more is a very interesting aspect and part of storytelling. It is a new way of getting information.

“My little baby daughter is six months old. She doesn’t know how to talk yet, she’s never been bitten by any animals. Sometimes I bite her, but not hard because she’s so adorable, like a little cake.

“Lots of information she hasn’t got yet. Sometimes information is a bit boring but if you get it from stories it’s more exciting.”

During the Brand changed the word “fart” to “pop pop” after asking the children for a more appropriate term.

The room was filled with laughter as he voiced different characters from the book or read out a turn of phrase such as “bum custard” or “puke buckets”.

Brand said: “Look at some of these words. I’ve never read this to children before. I wrote it a couple of years ago before I had children and I didn’t realise it was so full of rude words.

Have you heard these words before, maybe from your parents?”

He read for about 15 minutes and then posed for photographs with the children and their parents.

He also signed copies of the book, which were given to all the children.

Sarah Cartland, of Deanfield Road, Henley, who was at the event with her son Ashton, said: “It was really good fun and Russell was really friendly when we had a chat with him afterwards.

“Beforehand we were trying to work out who it would be and Russell was the most popular answer.”

Dale Bonar, of Gainsborough Crescent, Henley, who accompanied his six-year-old son Aidan, said: “I thought it was brilliant. Aidan really enjoyed it and Russell chatted with all the kids.”

Town councillor Sarah Miller, the fayre organiser, said: “We were really pleased it was kept a surprise. The children may not have known who it was and the book might have been a bit old for the age group but it was lovely.

“It was a shame we could only let a certain number of people in. It was Henley’s best kept secret and it was fabulous.”

Brand said: “It was lovely. I’m a father now so it’s nice to do a simple community initiative that can make a big difference.”

You can watch the full video here: