Residents discuss the good things about their village 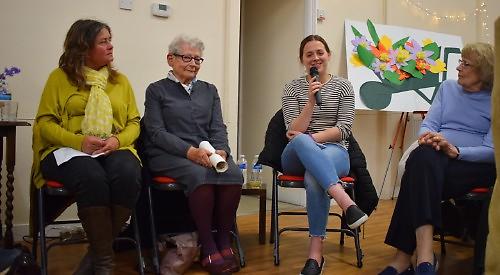 ABOUT 120 people attended a discussion about Sonning Common and its residents.

The event, called What Makes a Village, was held at the village hall and was organised by Colleen Paviour on behalf of Sonning Common Magazine.

Mr Fort, a parish councillor, who lives in Wood Lane, then questioned a panel of villagers on social aspects of their lives.

She talked about the potential creation of a recreation ground off Reades Lane, which would include sports pitches and a community centre.

Mr Fort said: “I was amazed by how many people turned out. It was very positive and I told people I did not want to hear about potholes, speeding or anything like that. The people on the panel talked quite openly without getting into rows or arguments.”

Mrs Paviour said: “Tom Fort was an excellent host and a big draw for the event. He kept the talk lively and engaging.

“The evening’s success means the magazine will be hosting more events in the future, mostly likely to do with literature and the arts.”

The event was sponsored by estate agents Davis Tate,
Loddon Brewery and Sonning Common Co-op. It was streamed live on Facebook for those who could not attend.