'B' team of pub cyclists raise £7,000 for charity with ride to seaside 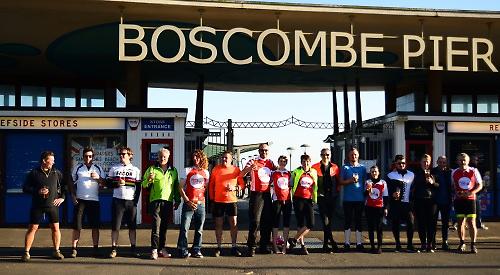 A TEAM of cyclists rode almost 100 miles from a pub in Sonning Common to Boscombe Pier in Dorset for charity.

The ride has become an annual event for the regulars at the Butcher’s Arms since they first staged it in 2014. The charity was chosen because pub landlady Ellie Blues suffers from the disease.

Each year her husband Rob picks a location which begins with the letter B. Previous trips have been to Bath, Brighton and Brading on the Isle of Wight. The team always begins the ride at the pub in Blounts Court Road. This year, 11 people started and then more cyclists joined them in Pangbourne and Basingstoke, so that 16 people finished the ride.

Russell King, of Walnut Close, Sonning Common, said: “The distance was just under 100 miles and most of us followed the same route but a few people went their own way. I was the oldest rider at 58 and the youngest rider was 18.

“I’ve done all the rides except the one to Bath when I was ill.

“I go to the pub about once a week with my wife for dinner or to meet friends.

“I have done a lot of cycling events in the past, which is why I got involved with this. We’ve had an amazing response to our fund-raising and every penny helps.”