Women proud of their roles in royal visit to girls' school 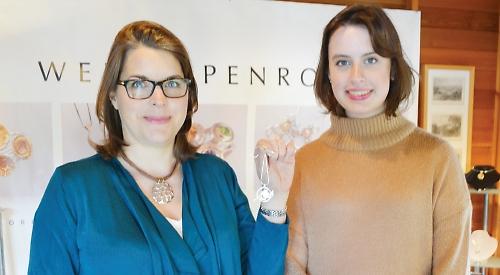 A WOMAN from Remenham returned to her old school to extend the official welcome to a royal visitor.

Felicity Rutland, who was made a deputy lieutenant of Berkshire in September, was first to greet the Countess of Wessex when she arrived at the Abbey School in Reading.

The 67-year-old, of Remenham Lane, introduced the countess to headteacher Rachel Dent and accompanied her on a two-hour tour of the independent girls’ school, which was celebrating its 130th anniversary.

She also formally bade her farewell at the end of the visit.

The Countess, who wore a knee-length white coat with gold buttons and beige heels, watched the pupils taking part in various academic and sporting activities and talked to them about their studies before unveiling a commemorative plaque.

She also inspected items of silver jewellery made specially for the occasion by school parent and artist Wendy Penrose, from Shiplake.

The countess would usually have been greeted by James Puxley, the Lord-Lieutenant of Berkshire, but he had another commitment and invited Mrs Rutland to take his place as she is a former head girl and parent and a current governor. It was Mrs Rutland’s first royal visit since she took on the role.

She said: “I would have been there anyway but it was wonderful to attend in an official capacity.

“The only downside was that I had to be quite formal and couldn’t stop to chat with staff like I would usually have done, which felt a little odd.

“I wasn’t nervous as I was very well-briefed. We had a walk around the site with the countess’s security team beforehand and the Lord-Lieutenant’s office explained the etiquette.

“I just had to curtsey when she arrived, which was more like a little bob. She arrived early but we were waiting and ready to greet her.

“She actually drove herself and was accompanied by two of her staff, including a lady-in-waiting, who I spent quite a while chatting with later in the day.

“I didn’t have a chance to speak with her personally because she was so busy giving her time to the children.

“She was incredibly warm and generous and they absolutely loved her. The younger ones were very uninhibited whereas the older ones were initially nervous but as soon as she spoke, they warmed to her and were proudly discussing what they were up to. I’ve been involved with the school for 60 years so it was a great honour to be part of the visit.

“It was a very happy occasion for everyone who took part and I’m pleased that my first royal visit as deputy lieutenant was one of such personal significance.”

Meanwhile, Mrs Penrose was commissioned to create a range of jewellery to mark the school’s anniversary.

She designed a silver pin, a pendant and a bracelet featuring a magnolia branch in flower as the school has a magnolia tree in its rose garden and because it represents the children’s growth and development.

Mrs Penrose, 48, of Orchard Close, is a former marketing director who started making and selling jewellery after the birth of her daughter Amy, now 16.

She is producing a limited run of several dozen pieces at her home studio. She makes them using “metal clay”, which is silver blended with other ingredients to make it more pliable. When it is fired in a kiln, the additives are burned away.

Mrs Penrose said: “I was very proud to be asked to create them and am very pleased with the finished design. My work is inspired by nature and it was nice to be able to create something with a very organic feel.

“Amy gave me plenty of feedback during the development and is very proud that something I’ve designed was shown to the countess.”