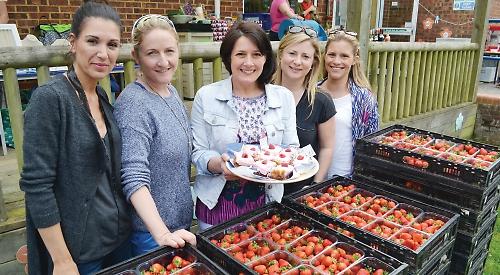 The Blue Peter presenter took part in arts and crafts sessions at a special table.

The annual fete, which is organised by the school’s parents’ association, also featured party games, a bouncy castle, barbecue, licensed bar and tombola.

There were also a raffle and auction with prizes including tickets to Henley Festival and a “date night package” with haircuts, massages and restaurant vouchers.

Jo Southwell, who chairs the association, said: “It was really good. Barney attending was great and we had a Blue Peter table for the children which they all loved.

“The fete was definitely busier than in previous years and a number of new parents for next year came along. Overall it was a great day, a nice, simple fete.”

The event is expected to have raised about £2,500, which will go towards the school’s new outdoor classroom.

Ms Southwell said: “For a school of 97 that’s a phenomenal amount for two-and-a-half hours.

“The outdoor classroom will increase space at the school and can be used for things like reading, music or art.

“This is our last main event as a parents’ association with the current committee. We have raised a lot of money for the school but we are going to step to one side let other people take charge.”

Meanwhile, families flocked to a summer fair at Valley Road Primary School in Henley, which was opened by town councillor David Eggleton and headteacher Tim Coulson.

Attractions included bouncy castles, face-painting, welly-wanging, pony rides, target football and a limbo as well as a cake stall and a bottle tombola where the goodies were donated by parents.

Owen Mayes, of Owen’s Animals, brought along a royal python, tarantulas, lizards, stick insects, cockroaches and a praying mantis for children to have a hands-on experience. Members of the school’s gardening club had a stall to sell plants they had grown.

Saturday’s fair was organised by Hannah Zoethout and Hannah Crispin, who co-chair the school’s parent-teacher association and were grateful the rain largely stayed away.

“It went really well,” said Mrs Zoethout. “The good thing about these events is everybody mucks in. Even though it is a little bit stressful on the day, you get so many helpers. Thank you to everybody who came and supported it.”

The fair raised about £2,000, which will go towards resurfacing the playground and the football pitch.