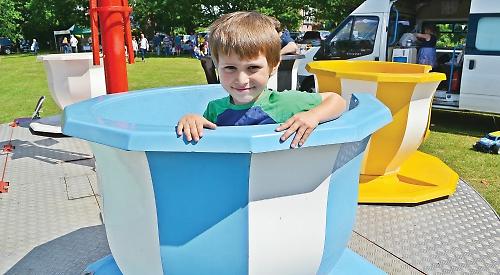 Traditional fairground rides including boat swings and a teacups ride were set up on the village green alongside dozens of stalls run by local businesses and community groups.

There was a fun dog show run by the Smiling Dog Company with prizes in several categories including best-looking male and female and best in show. Winners were presented with a “golden bone” award.

Other attractions included children’s races, a Punch and Judy show, tombola and raffle, a fresh produce stall, live music and a climbing wall run by a scout group from Reading.

Going Forward, a not-for-profit community bus company launched earlier this year, was exhibiting the newest addition to its fleet.

This is being deployed on the new 142 route, which links Goring, Whitchurch, Whitchurch Hill and Crays Pond to Reading.

Henley MP John Howell attended the fete and chatted with visitors and stallholders.

Organiser John Gray said: “The weather was forecast to be among the hottest days of the year so we were quite alarmed when we woke up to a grey, overcast morning. Fortunately, it had cleared up by the afternoon and we did well with the turnout.

“People have commented on how enjoyable it was and how good the attendance was. Our takings from the raffle were the best yet and with the WI serving tea it was a beautiful, quintessentially English scene, which is a major compliment coming from me as I’m Irish!

“The climbing wall went down particularly well. In fact, it was so popular that I’ve already booked it for next year’s fete.

“It was a great day out for all the family and brought people together. Considering that we were competing with an FA Cup final between two South-East teams, I think we did pretty well.”