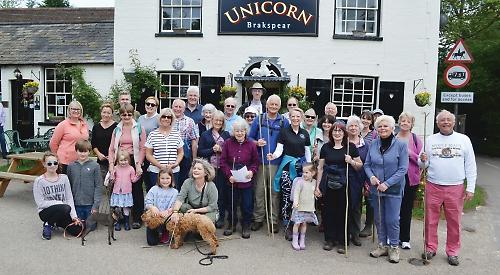 MORE than 30 people took part in the annual beating the bounds walk in Peppard.

The ancient custom involves walking the boundaries of the parish and praying for protection of the land.

The walkers met at the Unicorn pub in Colmore Lane and walked three miles along the north-western and northern boundaries of the parish before returning to the pub.

Some carried hazel sticks as a reminder of medieval times when children were beaten so that they remembered where the markers were. Before the group left, they were blessed by Rev James Stickings, rector of Sonning Common, Peppard and Kidmore End.

Edward Brooker, of Dove Lane, Peppard, said: “Beating the bounds is traditionally held on Rogation Sunday, the fifth Sunday after Easter, and dates back to medieval times.

“However. the origins of beating the bounds are possibly from pagan times and were a fertility ritual performed in the spring in the hope of good crops.

“In medieval times, beating the bounds was led by the rector of the parish and his churchwardens and they were accompanied by young and old members of the parish.

“The parish boundary markers could be rivers or streams, rocks, houses, trees, hedges or ditches, any manner of things were used.

“As the beaters processed along the parish boundary, they would stop at each marker and beat it with a willow wand to show the young in particular where the boundary markers were.

“Boys were upturned and had their heads bounced on the markers or were thrown into ponds or streams and then beaten with willow wands so they would be sure to remember where the boundary markers were.

“In today’s world this sounds very cruel but in medieval times there were no schools, maps or iPhones and few books.

“Only the very rich could read so the information about the boundaries was literally beaten into the boys so they were sure to remember it for the rest of their lives.

“The wands were willow but there is not much willow growing in Peppard so we used the plentiful supply of hazel from the hedgerows.”